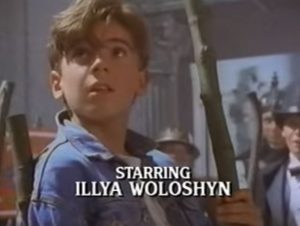 Apparently Ivan Fecan, then CBC’s head of programming (now CEO of the CTV Television Network), had not read our package on his skiing trip after all, and got to it only when he returned to the office in the new year. Later in January he was planning to make a trip west to visit CBC’s “regional” offices, including Vancouver. Meanwhile, via Michael Chechik, our producer, we heard an early glimmering of Fecan’s response to our show: it lacked “allegory”.

A meeting was set up so that we on The Jellybean Odyssey team could get direct feedback from Fecan while he was visiting Vancouver. We were to convene at the CBC building on Hamilton Street at, I think, 10:00 a.m. on Monday 22 January. I put on a jacket and tie, packed the script, proto-series-bible, and episode ideas into my attache case, and joined the other commuters driving over town to work–a most unfamiliar experience to me, who had not had to commute to a workplace since I’d moved to North Vancouver in 1985.

The meeting was set not in a conference-room, but in a “green room”–a lounge used by performers before going on to a soundstage. There was fairly elaborate security to get inside the brutal concrete mass of the Crown Corporate building (bomb threats due to their programming, possibly). I made it to the room, along with Warren, Michael, Hart Hanson, and I believe Phil Keatley (still the head of drama development in Vancouver at the time–help me out Warren if you remember differently). In came Angela Bruce, CBC’s head of children’s programming, tall, English, with pearl-colored hair and a cane, with her boss Ivan Fecan, a relaxed man, just a few years older than Warren and me, who had acquired quasi-Wunderkind status for having worked in L.A. with Fred Silverman, a famous TV executive. We all shook hands, Fecan dropped onto one of the modernistic foam seats, and we got going.

“I like this project,” said Fecan, “it’s a very creative idea. But as I read the script, I found myself wondering, what’s the allegory here?”

There was a brief silence, but I’d prepared for this moment.

“We heard about that,” I said, “so I looked up allegory in the dictionary.”

“Don’t quote the dictionary at me!” said Fecan with a laugh.

“I call it allegory,” said Fecan, “but what I’m asking is, what does this show mean? What’s its relevance? What is its sociological mission?”

A much longer silence fell on the room. Sitting beside Michael, I could sense his mouth working a couple of times, but nothing coming out. I realized that if anyone was to rise to this challenge, it should be the show’s creators. I sensed that here was the crisis–the crunch. Again it was I who broke the silence. I had no idea what I was going to say.

“Our vision of the show,” I said, leaning forward and sculpting something, maybe our idea, with my hands, “is not so much sociological…as intensely psychological. Here we have a kid going into the depths of his mind, and finding a world of adventure there. He can see his relationships there in a new way: his friends, his family, his missing father–relationships that everyone has, but doesn’t have this chance to kind of explore this way…”

In fact, I’m not exactly sure what I said after that first sentence, but it was along those lines. My basic thrust was that the vision for the show was not “sociological”–outward, but “psychological”, inward, and that this “inward” is just as universal as the the “outward”. But more than that I just wanted to respond: to return the volley and stick up for the show as being meaningful and important.

With the ice thus broken, other people chimed in with their views–Angela, Hart–that the show did indeed have the characteristics that Fecan was looking for. I recall Hart sitting with a sheaf of papers on his lap, lifting through them theatrically, and saying sotto voce, “It’s there–it’s there already!”

At length, Fecan cut off the discussion.

“Well, it’s not there yet. I don’t want a show that’s just a bunch of kids running around doing stuff. I think we need to see another draft of this.”

With that he was up and heading for the door. In the doorway, he turned to look me in the eye, and said with a smile, “You look like a deer caught in the headlights.”

He turned and left with Angela.

At that moment I became sure we had a series.