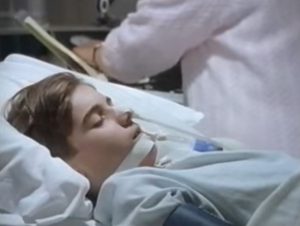 I think it was in about November 1990 that Phil Keatley left his position as head of CBC Vancouver’s drama department and was replaced by David Pears, an executive returning west from Toronto–a move that, in CBC terms and in Canadian corporate and government terms generally, could only be called a demotion. Pears (and I call him “Pears” because that’s what he called himself: when he called you on the phone, he’d identify himself by saying, “It’s Pears”) had been involved in the production of the then-flagship CBC drama Street Legal, often referred to by those of us in the Canadian TV biz as T.O. Law, since it was widely seen as an imitation of the highly successful Steve Bochko series L.A. Law in the U.S.

Meanwhile, Hart Hanson, the story editor for our developing Jellybean Odyssey show, had outgrown his junior post at CBC Drama in Vancouver, in demand elsewhere as a freelance TV writer, a story editor for TV series in production, and also as a professor of creative writing at UBC (whew!), and had left, to be replaced by Linda Coffey.

I don’t remember now whether it was our first meeting with “Pears and Coffey”, but I think it was: another summit-meeting to talk about the show, this time held, more formally, in the boardroom at CBC Vancouver. Again I (no doubt) packed my attache case and put on jacket and tie (although this time I no doubt also took transit to get there; who needs the stress?). Warren and Michael were there, of course, and possibly Hart, maybe even Phil Keatley. We took our places at the long conference table, sitting in chairs with absurdly high backs, furniture that felt like some kind of modernistic throwback to a medieval dining-hall.

We had all introduced ourselves. In fact I had met Pears years before, in the 1970s, when he had come to visit my father one day in West Van. I didn’t remember anything of his appearance, only an impression of someone who thought rather highly of himself and who regarded his issues and problems as very important. Now, in 1990, he came across as an older man, short, with a long gray ponytail and drooping mustache, and very casually dressed in things like jeans, huaraches, and untucked shirts left open to the chest. If smoking had still been permitted indoors, he would have chainsmoked his way through the day.

Pears ran the meeting. His style was folksy, soft-spoken, and, I thought, rather long-winded. He praised our show and its concept, talking about the “arcs” of the series (TV-writing speak for the overarching stories that continue beyond individual episodes) and comparing this with his own experience working on Street Legal, a show which, he claimed, had A, B, and even C arcs running through it–an example of subtlety and depth. (For the record: Warren and I did not think too much of Street Legal as a show; we really did see it as a “me too” imitation of L.A. Law.)

But, although the concept and the writing were on the whole very good, the CBC execs back in Toronto, having examined the material, had discovered that it had a Flaw. And this Flaw was what was holding back the show from being as good as it could be–and as good as it needed to be in order to get a production order. If we could find a way to address the Flaw, then we could very likely have a TV show that could indeed be produced and broadcast. Pears saw his first task with this project as being the correction of the Flaw.

I should’ve counted how many times Pears said the word Flaw; it would have made a great statistic as part of the lore of the show. It was quite a few times. At length Pears revealed what the Flaw was that had been discovered through the perspicacity of the CBC execs: the Flaw lay in the writing of the upworld.

The upworld, as I’ve mentioned, was the term we gave to the parts of the show set in the world of waking life–the world where Jay lay unconscious in his coma, watched over by his mother and his friends Donna and Keith. Warren and I had wanted this world to have as much impact, if possible, as the downworld of Jay’s fantasy-adventure. We wanted to be gritty and real with how comas actually happen–their real effects and symptoms, and the real methods of treating them, when done in the advanced and creative ways then being developed. We wanted the audience to have to work as hard to follow the upworld coma-therapy adventure as it would to follow the downworld adventure. We didn’t want a “cute” or soap-opera-type coma; we wanted to do real coma–scary coma–and dish that up to our kid audience. Why not? They’re only one skateboard-accident away from the same situation, after all.

It appeared now that this vision was not flying with the network–anyway, not with David Pears. The next push of rewriting would involve mainly our upworld stories.

After the meeting, Warren and I felt a bit depressed about Pears’s assault on our upworld, but agreed that it could have been worse–an assault on the downworld story. After all, when a new executive comes in, they have to make their mark somehow. It seemed the core of the show was being left intact. Pears’s enthusiasm for the show idea seemed genuine, and I believed that he saw it as a show that could and would get produced. So it would be worth the extra effort. He had not come to kill it.

Another thing: when I met Pears before the meeting, I immediately recognized him as the figure described to me by the psychic Sarah Scott Simonson: short, egotistical, powerful. We would have to watch out for him. Not that there was a lot we could do, besides say, “yes sir, yes sir, three bags full…”