I’ve been sharing my discoveries about the art of character creation in storytelling. The idea here is to build characters from the inside out, to make vital, interesting characters from scratch instead of trying to create characters based purely on people we know. There’s nothing especially wrong with basing characters on people you know, but there are limitations to that approach:

This second point is the more important, for, if your story is to achieve its maximum effect and its full potential, it needs to be populated with the right characters to make that happen. Yes, you can make tweaks to your family, friends, and coworkers to get them to fulfill the functions required by your story, but at the end of the day what we’re talking about is altering off-the-rack people instead of tailoring them specially from whole cloth. It’s much more powerful, as well as more useful and more satisfying, to invent vivid characters from scratch. That’s what we’re trying to do here.

In part 1 of this series we looked at how to assess your character needs in terms of the kind of story you want to tell. In parts 2–4 we looked at using different kinds of archetypes to serve as the nucleus for a character. For convenience I’m calling them:

A proper major character will need to use all of these (minor characters are a different case—I’ll talk about them too in the future). So how to put them together?

Recently Kimmie and I watched the movie Gone with the Wind again: the 1939 production based on the novel by Margaret Mitchell, published in 1936. The heroine, Scarlett O’Hara, is a famous character; why don’t we take a look at how she might have been built from scratch using my method? (Spoiler alert: in what follows I will be talking about the plot of Gone with the Wind, including its ending; you may want to read or watch it before continuing on.)

I admit that I have a slight problem in trying to categorize this story. In my opinion, the author herself was not quite clear about what she wanted to say with it. The story certainly has an epic dimension: its events unfold as Georgia and the Old South are ruined by the American Civil War and reconstituted in its aftermath. Gone with the Wind is also famous as a romance, with a major triangle formed by Scarlett’s desire for the gentleman Ashley Wilkes, who is married to his cousin Melanie, and her status as the love object of another man, Rhett Butler, a swashbuckling rogue from Atlanta. But in my view the story is really a tragedy, since the pigheaded and purblind Scarlett never wakes up to her own true feelings of “love” (the word must be used in quotation marks for her) for Rhett until it is too late—or is it? The ending is left ambiguous, for Scarlett thinks she can get Rhett to love her again, and . . . she’s used to getting her way! However, Rhett is no pushover, and he seems truly fed up with her. So we don’t know. If you take the view that Scarlett will recapture Rhett’s love, then the story might be classed as what Christopher Booker would call a Rebirth plot: the tragic hero, or in this case heroine, emerges from his flawed approach to life to a new, more fulfilling approach (think Ebenezer Scrooge in A Christmas Carol). Scarlett, by the end of the story, at least has figured out what she really wants, but she still doesn’t know what love is, so there are still big problems ahead. For me it’s a muddle. 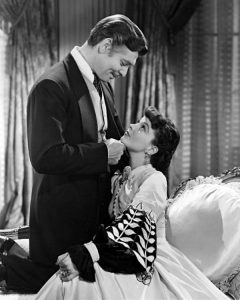 Because Scarlett remains basically unreconstructed (unlike Georgia) by the end, and she is made up mostly of negative traits, I will class her as a tragic heroine: she has flaws that get the better of her in the end. But in that role she’s a dynamic, larger-than-life character, and, starting from scratch, that’s what we’re trying to build. Since we haven’t created her yet, all we know at this stage is that we want a passionate, headstrong character who stubbornly clings to her negative traits.

We have thus already specified her story archetype: she will be the heroine of our story, but a negative or “dark” heroine, a tragic heroine. That is her role or function in the story.

Next let’s look for our character’s heroic archetype, taken from the list provided by Tami D. Cowden, Caro LaFever, and Sue Viders in their Complete Writer’s Guide to Heroes & Heroines, as discussed in part 2 of this series. Two of these spring out: the Seductress and the Boss. The authors maintain that it is perfectly possible to combine archetypes in forming a character, as long as the archetypes are compatible and there are no more than two of them. In Scarlett’s case we appear to have a young Seductress in the early part of the story, but who, when we look more closely, actually bears traits of a young Boss, in the variant called the Princess. As the story wears on and Scarlett is buffeted by more  and more challenges, the Boss in her becomes ever more dominant. Just listen to the description of the Boss:

The Boss takes charge of her circumstances and makes things happen. She is strong, tough, and gets her way no matter what. She remains unconcerned when she ruffles feathers. Her goals and priorities are far more important than hurt feelings. She is outspoken, resourceful, and persuasive.

Winning is everything to the Boss. To achieve her ends, she can be calculating. She will shade the truth in order to gain her object, and she is not above manipulating circumstances to make things go her way. Whatever helps her get across the finish line is all in a good day’s work.

Yes, that’s our Scarlett all right.

The final archetypal component I call the psychological archetype, and this I draw from the list of archetypes provided by Caroline Myss in her book Sacred Contracts: Awakening Your Divine Potential, as discussed in part 3 of this series. Perusing this list, I find that the best fit is provided by Femme Fatale:

The female counterpart of Don Juan sometimes adds the twist of killing her conquests as an expression of her ability to dominate. As with Don Juan, the Femme Fatale represents refined skills at manipulating men without investing personal emotion. The Femme Fatale is both a sexual and a financial archetype and either comes from or is drawn to money and power. Seducing men with money and power and for the sake of personal control and survival is a classic part of this archetype, although the Femme Fatale is not looking for a home in the suburbs and the pleasures of family life.

Yes, there is a close link here with the heroic archetype of the Seductress. Sometimes that happens, probably especially with principal characters. But this still allows us to know our character better. Putting our three archetypes together, we can now say that Scarlett is a tragic heroine whose main motivational engine is that of the Boss, but that her behavior, her way of trying to reach her  goals, is often that of the Femme Fatale. She has the hard, calculating, businesslike attitude of the Boss, but she finds that the strongest tools in her arsenal are the seductive and manipulative wiles of the Femme Fatale. Thus Scarlett O’Hara, one of literature’s most memorable female characters.

Please note that we have not drawn the whole character here; we have only identified the archetypes on which this character will be based. In doing this I would say that we have formed the armature of the character; we have identified what type of a character she is to be. But in doing this much we have come a long way. Even though our character is not yet fully formed, she already has strong motivations and attitudes; she even has a certain past history, since the book Heroes & Heroines sketches in the childhood experience of each of the archetypes. Our proto-Scarlett is already set to be a dominating presence in a story, especially when contrasted with the insipid, wishy-washy impression that so many fictional characters make. She will overpower any other characters unless they are also established with similar care and firmness.

We have finished, for now, with using archetypes for creating a character. What comes next? In recent years some sophisticated tools have appeared that allow the writer to work directly with a character’s inner emotional nature, to give the character a richer inner life and to map out the character’s moral structure. Next time we will get started on that process. Join me!

In the meantime, take a look at my Creating Characters reading list (one of a growing collection). If you haven’t already done so, now would be a good time to catch up on parts 1 – 4 in this series.