Posted on 7 November 2018 by Paul Vitols 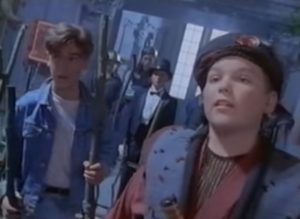 With the arrival of 1991, Warren Easton and I were again tinkering with the pilot script for The Jellybean Odyssey, and with the other scripts we had written (I believe by that time we had also written the next two episodes, “No Fair”, in which our hero Jay is “tried” by a kid-tribunal in his new fantasy world for being “different”, and “Out of the Woods”, in which he becomes involved in a conflict between a Robin Hood-like band of “outlaw” kids and the quasi-police state of the distant and mysterious Brad).

Warren and I were eager to explore these overtly “political” scenarios of our kid-world, and deliberately turned toward issues of justice, power relationships, and civil administration, shown in the distorting (but clarifying) mirror of our fantasy-kid-land which we called the downworld. While I can’t be sure, I believe that this path satisfied CBC head of programming Ivan Fecan’s wish for a “relevant” show with a “sociological mission”. Our show definitely was not simply “a bunch of kids running around doing stuff”.

However, the new tinkering with the material was not bringing us much extra revenue; that had been tapped long since, along with some advances against future work for our show. With my two mortgages, I was heading deeper into debt and had to find a way to scare up more income. Kimmie was of course still working full-time at ICBC; I, the big-time TV creator, was bringing in next to nothing.

One place I turned was to the CBC itself. I found out that the new junior drama executive in Vancouver, Linda Coffey, was responsible for reading and responding to unsolicited submissions from would-be scriptwriters, and that she retained a few readers to go through the projects and write brief reports on them. Probably after one of our Jellybean Odyssey meetings, I asked Linda whether I could maybe be one of her readers.

Linda, recognizing my predicament, readily agreed, and in March 1991 I received my first sheaf of scripts from The Wall: a set of shelves at one end of her office, covered with submissions. From then on, each Friday I would drop off my reader’s reports (these documents are called “coverage” in L.A.), pick up a fresh set of scripts, and collect a check for $150 at CBC’s payroll counter.

(The scripts I read, by the way, were almost all shockingly bad–not even the least bit professional.)

Another effort I made to keep body and soul together was to approach a newly formed scriptwriting fund set up by the Canadian pay-TV channel called First Choice (the fund was called the Foundation to Underwrite New Drama, or “FUND”–cute, huh?). I’d heard a radio interview with someone who had attended a school for butlers in England, and was now the butler of a rich American family. This had intrigued me, so I looked into the school, and came up with an idea for a kid’s movie that I called My Dad the Butler, about a divorced dad who attends such a school and winds up as the butler to a female pop star. While the star visits Vancouver to record an album, the butler’s 13-year-old daughter tries to reunite with him–an impossibility in his new post, or so it seems…

I got Michael Chechik to write a letter saying that if this script got written, he’d be willing to produce it, then I sent the proposal to FUND. They responded with a go-ahead to write an outline on the idea. Yahoo! I had another project in development! This project would later go on to a story treatment, and would bring me about $8,000 or so in writing income, all told–a lifesaver. As I told Michael: “the CBC is going to be calling story meetings for our show, and I won’t be able to come because I’ll be delivering pizzas.”

Reading other people’s scripts and working on a butler story were keeping my head above water in 1991.

Another thing that happened that year was that the CBC, meaning the local drama-development exec David Pears, got our story editor Hart Hanson to write a draft of our pilot script. Thinking back, I can’t quite remember the exact reason why. Was it that Warren and I were “busy” working on other scripts or outlines for the show at the time? Or was it simply a “normal” step toward getting the show ready to shoot, by having its story editor rewrite the writers’ material?

Hart was already our story editor through the development process, and had provided much valuable and friendly help, in effect teaching us important aspects of TV writing. As a writer he himself was excellent and fast. But Warren and I saw no need for anyone to be rewriting our pilot: it was already good–excellent in fact; even brilliant. We saw this as a step toward removing creative control of the series from the hands of the creators–and we didn’t like it.

But no one asked us what we thought about it. We may have created the show and written the scripts, but to Pears and the CBC we were newbies and amateurs, and would have to take a backseat to the “pros” as the show got closer to production.