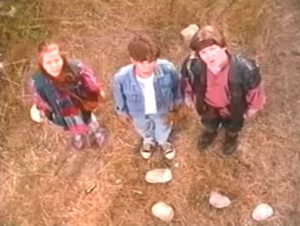 A subtle but important turning-point arrived for our proto-series, The Jellybean Odyssey, when, in a story meeting held, as was now usual, in the glass-encased meeting-room at the new Omni-Films suite in Gastown, the CBC drama executive David Pears declared that Hart Hanson’s rewrite of our pilot script did not have the “Jellybean” feel.

This meant that Pears was acknowledging that there was a special, unique quality to the writing–maybe perhaps especially shown in the kid dialogue–that Warren Easton and I brought to the script that gave it its distinctive and unique style. Now Pears wanted to roll back to our last draft, and get Warren and me to do whatever further tinkering was required. I don’t recall now whether Hart was himself present at that meeting, but whether he was or wasn’t, this could only have been felt as a slap in the face to him. The story editor in a TV show represents “management” as far as the writers are concerned, and to be undermined or cut off at the knees by management is painful and abnormal. It’s a stab in the back–or maybe in the head, from above.

Of course, from the point of view of me and Warren, the creators, Pears was only stating the obvious. As the show’s creators, we knew it best and understood exactly how to create its special “flavor”. Hart, although he was one of the best TV writers in the country, had not in fact been engaged to rewrite our script because he was a better writer than we were, but because he was part of management’s own picked team and therefore would be more ready to take direction from the network. The show’s creators, who had suffered and starved for two years now in “development hell”, would not simply take orders from the network; we cared deeply about the show and would push back when we felt the executives were demanding things that would make the show weaker and less original. In simple terms, Warren and I were not on the network payroll (were hardly on any payroll), and did not see ourselves as “reporting to” the CBC or its executives.

Notionally we reported to Michael Chechik, the producer. But Michael was the first to admit that he was not bringing a personal creative vision to this series; that was our job. We thought of the ideas, and we wrote them. And right now, this show didn’t exist in any other form but writing. At this point, Warren and I were the show. Michael valued our vision of the show and also the way we wrote, and was not inclined to pass on whatever pressure he might be getting from Pears to make us change this or that. At most, if he was getting any such pressure, he would tell us about it candidly and ask us what we thought we should do about it. In his hesitant, questioning, but fast-talking way, he would work through how to respond to the latest network demand or request.

In any case, somewhere in here, probably spring 1991, the CBC took the big step of ordering the production of the pilot.

After pumping nickels and dimes into the writers to output scripts for two years, this was the moment of committing to bigger money. The pilot episode of The Jellybean Odyssey would eventually cost about $500,000 to produce. Even though, in the Canadian scheme of television production, the CBC’s share was only 1/3 of that, it was still significant money, and took everyone a large and hard-to-revoke step closer to producing a series.

Of course we were ecstatic. It had been three years since the production of “What’s Wrong with Neil?”. Now we were having another original show produced, entirely of our own creation, and, with a continuing series riding on the outcome, the stakes were much higher.

Now, after sitting in endless story and network meetings, and advancing small sums to keep the writers alive, Michael would get to put on his producer hat properly and make a show. It had to be done carefully, since many staffing decisions now, such as casting, would have consequences for the continuing series. He had to find a team that could make a show worthy of all the creativity and effort that had gone into its creation.

But summer 1991 was coming on, and Vancouver was a lovely place to shoot film. Once again we could enjoy the pleasure of visiting film sets close to home to watch busy people shoot the lines we had written. As far as I was concerned, we’d more than earned it.