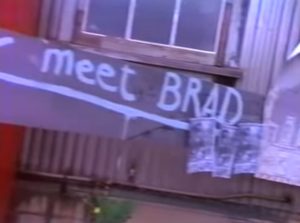 I first became involved in filmmaking with my friend Brad in grade 7. He (or I suppose his mother) had a Eumig 8mm home-movie camera. (Video-production equipment in those days–1972–was large, expensive, and existed only in professional studios.) With this fantastic resource in his possession, Brad was keen to make films, and so was I.

We did some short films and some animation on Brad’s Eumig, but ran up against the problem that to make something more than the most rudimentary film, you had to be able to edit the film. Later, as we got into junior high school, we were delighted to find that the school owned a new, high-end Canon super-8mm film camera. Goodbye Eumig–this was what we wanted to make movies with now.

Our real opportunity came in grade 10 in 1975, when, as the final big assignment of the year, our English teacher told us to form groups and create an audiovisual or other media project of some kind. Fantastic! Here was our chance to get our hands on some school time and equipment to make a film!

Brad and I jumped to it and started writing a film script. It would have to be silent, of course–movie sound technology was far beyond our reach–but we could do a lot with silent film.

Brad wanted to do a story around a strange, mysterious instrument that had belonged to his late father, who had been a marine electrician of some kind. Labeled a “field strength indicator”, it was a fist-sized gray box with a needle-dial, a single rotating knob, and an extendable antenna like on a portable radio. We didn’t know what it was–it was just a device of some kind. As far as we knew, it didn’t actually do anything. But from this prop grew a story which we called, imaginatively, “The Device”, a Cold War satire told from a Keystone Kop perspective. To give our Cold War story bite, our device needed to be a secret weapon of some kind. We hit on the idea that whoever held the weapon could simply point its antenna at some object, twist the knob, and that object would simply disappear–disintegrate, vanish. This relatively simple movie effect could be done in-camera, and also gave us a plausible Doomsday Weapon for our story.

Fantastic! This would make a cool story–and we already had the prop!

Excitedly, Brad and I spent hours and days in his living-room, scribbling lists of shots on sheets of looseleaf, unfolding our complex satirical farce. At age 16 I was (co)writing my first film script. I didn’t know it at the time, but writing a silent movie is perhaps the best scriptwriting training, because it forces you to think of how to tell a story purely with pictures–and this remains the key skill of the scriptwriter, even one who has dialogue at his disposal.

There was no typing; our finished script was a rumpled sheaf of looseleaf pages of scribbled shots, crossings-out, and marginal notes. Armed with this, we innocently undertook the shockingly difficult task of producing our own 30-minute movie. With our friend Tim, who had a job and therefore money, as our third producer, we spent weeks on various locations around the city, mainly in parks, shooting our madcap farce (which ends by “disappearing” planet Earth when a little kid points the device at the ground). Indeed we never finished filming by the end of the school year, and had to show our teacher Mr. Ryan our script and all our raw footage so he could give us a mark.

We pushed on filming through the summer, and continued to work on postproduction in our off-hours when we started grade 11 in the fall. We didn’t actually finish “The Device” until we were most of the way through the school year.

One of our production expenditures was to buy editing equipment for super-8mm film: a viewer with two hand-cranked reels for film, and a splicing block that made precision cuts to the film and allowed us to splice lengths of film with transparent editing tape. Finally we had the tools not only to shoot a film, but to assemble it.

Setting up our editing bench in Brad’s spare room (which also housed his piano), Brad and I gradually put together the film, adding scenes and sequences as they were filmed and developed. Getting some coaching from my father, we set up our editing room with proper gear such as a board with pins on which to hang strips of film, using a lined wastebasket to hold the tail-ends of longer clips. We cut and recut, winding and rewinding the emerging scenes to view them on our little viewer–the first audience for our growing movie.

I learned that I loved editing film. When you shoot a film, often with multiple takes of each shot, there is no sense of story when you develop the raw scenes. The story emerges–or reemerges–in the editing process. Find the right points to make your cuts, and you develop a seamless, flowing story (provided it’s been shot properly). We fiddled and fussed, trimming frames, taking shots out, putting them back in, and rolling the film through the viewer one more time. We discovered that we needed more or different shots, and added these to our list for future shoots. We did one such pickup shot–a closeup of a note taped inside a newspaper–out on Brad’s patio while taking a break from editing.

The finished product was very good for a first effort. Although silent, the movie had a piano score composed by Brad and synchronized with the picture via a magnetic stripe on the edge of the finished film–the reigning technology at the time for adding sound to super-8mm. We got our classmate Joyce to perform most of the piano music and recorded it in the music room on the school’s baby grand piano, using the school’s high-end Revox audio tape recorder. “The Device” went on to win Best High School Film at the 1976 B.C. Student Film Festival, and was an audience favorite at the festival screenings. Yes: people laughed at our comedy! (The festival projectionist said to us, after screening our film, “That must’ve been fun to make!” We exchanged glances; we might have used the word “grueling” or “frustrating” instead.)

All this by way of saying that I developed an early appreciation for the importance of editing in the filmmaking process. In a sense a film editor is more like a scriptwriter than like a member of the production process. It makes a big difference how a film is edited, and indeed film editor is a big creative credit in the movie business, along with the writer, director, cinematographer, and composer.

Editing was the next hurdle for our TV pilot The Jellybean Odyssey, but I’m again going to have to save that for next time.