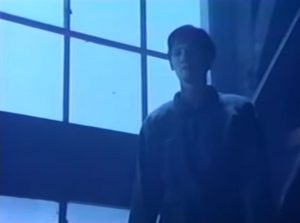 It was (I think) September 1991; the main filming for the pilot of The Jellybean Odyssey was done and our show was in “postproduction”–essentially all those things done on a film after the cameras have finished shooting. Primary among these was editing.

Omni-Films had started out as a producer of documentaries and corporate films. Their first feature documentary, Greenpeace: Voyages to Save the Whales, had garnered Michael Chechik a Genie. Our script “What’s Wrong with Neil?” was their first foray into drama. “The Fall”, the origin episode for our new would-be series, was their second. The expertise of the film editors that Michael had worked with hitherto had therefore been in documentary-making, a type of filmmaking that arguably is even more dependent on good editing than drama, since documentaries are often “scripted” or built or “discovered” in the editing room.

The editing team for our show was composed of excellent editors who had come from documentary-making. And the first cut of the episode was proficient, correct, followed the script, used the excellent footage shot by the director Jorge Montesi–but the story came across as flat and slow-moving. I recall watching an early rough cut of the episode, my excitement at finally getting to see the result of our efforts on a TV screen, and my growing feeling of unease and letdown.

“My god,” I thought, “was our script no good after all? How could we have added more zip, more pace to our story?”

I had a bleak feeling that we had not written the script as well as we should have, and that somehow this failure had not been caught or corrected in all the many readings and story meetings over the past two years. It was a terrible thought: our show was less good on film than it was on paper!

Warren and I were depressed. We weren’t as good as we thought we were–and neither was our show. And here I’d quit my day-job.

We met with Michael and the local CBC execs to talk about the show. We all agreed that it wasn’t firing on all cylinders. It was hard to put one’s finger on what exactly was not working, but one thing that stood out was the climax of the show. This was the section in which our hero, Jay, is dropped from a modified shopping-cart into a swimming pool, and remains submerged there for a long time, apparently drowning, while in the upworld his “real” self is undergoing the crisis of his head injury, with his quickly rising intracranial pressure threatening to kill him quickly. We had written intercut shots to an electronic monitor showing his pressure level, and it goes into “alarm” mode when a critical threshold is crossed. Somehow the pace here seemed slow and unexciting, even sleepy.

David Pears, the CBC executive, took the problem in hand. He personally supervised a recut of the show’s climax, probably using a CBC editor in a CBC editing suite. A couple of days later I saw the result: a much tighter, snappier, more gripping climax. I felt jubilation–and a jump of hope.

Indeed, I was so excited and glad that I went into Pears’s office (he’d left for the day), wrote him a personal thank-you note, and left it on his desk.

Soon Michael was looking for an experienced editor of drama to do a recut, and found one in the person of Jana Fritsch, who had been working on the CBS series MacGyver starring Richard Dean Anderson, which was also produced in Vancouver. Jana (whom I never met) did a whole new edit of the pilot.

Michael slotted the resulting videocassette into a VCR for us writers to watch. What a difference! I was intrigued to see how Jana had handled the material. She cut frequently, most often to show characters’ reactions to what was happening or being said in the scene. It created a fast-moving feeling in which the characters were involved with the story. Next time you watch a drama, pay attention for awhile to how it is edited: notice when the camera cuts to characters’ reactions. The characters may simply be watching what’s going on, but their involvement in the scene brings the audience’s involvement. Good directors always film these “reaction shots”, and good editors use them creatively to knit scenes together and give them flow and feeling.

When I saw Jana’s recut of the pilot I felt I’d seen a whole new show–and a damn good one. There was our script after all! There was our story–the edgy, fast-paced adventure we’d put on the page! We had written it! Jana Fritsch had been able to tell it with pictures.

Now I knew we had a winner–we all knew it. Even David Pears was happy. No mention now of the “tension-blowing” scene 49. Scene 49–Jay’s climactic encounter with his mother in a mist-shrouded warehouse–was in there, big as life, and delivering the full goosebump-inducing effect it was intended to have. What a relief. After two years of struggling to get this thing made, what a relief.