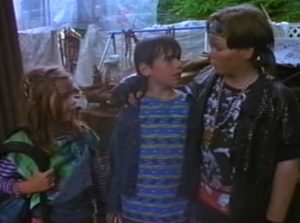 At the risk of sounding whiny, writing a good script is hard. If you have any trouble believing this, I can only suggest that you try it. I speak from experience–not only my own as a writer, but also, during 1991, as a paid reader of scripts for CBC Drama in Vancouver.

The good scripts I saw there were notable for their rarity. As I recall, there were only three, maybe four, scripts that actually aroused my enthusiasm and generated a positive report from me. Two of those wound up being produced–one by the CBC as a made-for-TV movie, the other as an independent feature film. This tends to confirm Robert McKee’s contention that good scripts do indeed get produced. He thinks it’s a myth that there are all kinds of great scripts out there, lying in drawers, gathering dust because Hollywood and the film business are too schlocky to produce them. Truly good scripts do get produced–eventually.

One of my favorite stories in this vein is of the script for An Officer and a Gentleman, written by Douglas Day Stewart probably in the late 1970s, and, in my opinion, one of the best movies of the 1980s. Stewart had written other scripts for hire, such as The Blue Lagoon, but this script was done on “spec”–speculation, an industry term for a script that is the writer’s own idea, written for love and not for pay. The idea is that you write the script, then sell it and get paid.

Stewart himself was an alumnus of the aviators’ school in Puget Sound, Washington; it was a world he knew intimately. The phenomenon of local blue-collar girls’ trying to catch Air Force officer-husbands in the 12 weeks of the training program was real. He created the character of Zack Mayo, the cocky, lone-wolf martial artist who signs up in search of somewhere he can belong, and by the time he was done he knew he had a winner. He’d written a great script, and he knew it.

He thought, “If I can’t sell this script I might as well give up, because nothing makes any sense.”

He started peddling the script, but couldn’t get anyone to bite. Why? It was the late 1970s, and no one wanted to do another “war” movie. The decade had seen the production of movies like Coming Home, The Deer Hunter, and Apocalypse Now, and, although everyone thought the script itself was good, all the studios were “warred out”.

Stewart was frustrated, because as far as he was concerned, it wasn’t a “war” movie–it was a love story that happened to be set at an Air Force training academy. There was no combat; the action never left Puget Sound.

He kept shopping the script. Eventually somebody bit: it was Lorimar, producers of the hit TV series Dallas. They hadn’t made a feature film before, but they were jacked on the script and thought it could be a winner. Lorimar bought the script and set about making the movie. It went on to be one of the biggest hits of 1982.

As a writer, one of my favorite parts of the Officer and a Gentleman story was how the filmmakers had decided not to bother shooting Stewart’s final scene, which was when Richard Gere, in his officer whites, strides into the pulp mill where Debra Winger works and carries her out while her coworkers cheer. Apparently Taylor Hackford, the director, and others, thought the scene too corny and didn’t want to shoot it. Stewart begged them to just try shooting it–to see what it would be like. He was just able to talk them into it. It proved to be the “money” scene in the movie and was probably responsible for half of their total box-office take.

My point: it was a good script and it got made, despite unfavorable headwinds in the current production climate.

Warren and I were challenged with the task of coming up with 13 great episode ideas for season 1 of what was then still called The Jellybean Odyssey. We’d only written a few scripts in our lives up to that point. This was a huge task.

In a way the task was all the larger because we were inventing a whole fantasy world. Writing a cop show or a courtroom drama provides certain automatic parameters on what you might write about. This was wide open, and for that very reason created anxiety. When you can do anything, what do you do?

For inspiration we got ourselves a copy of Grimm’s Fairy Tales and of Robert Graves’s telling of The Golden Fleece. Although our show was called an Odyssey, Warren and I felt that Jason’s quest for the Golden Fleece might provide a more workable story-template, perhaps because in Homer’s epic so many of the adventures involved fantastic monsters–and we weren’t planning to do a “monster” show. I’ve already described how our character Jay started out as Jason, and was shortened to Jay after we always abbreviated his name as the letter J, and referred to him as such. Jason had a definite goal, he had his crew of Argonauts as our Jay had his companions on the journey, and he had specific episodic adventures en route to the fabled Golden Fleece at Colchis on the Black Sea. As we ventured on our own voyage of creation, this was our security blanket.

The stories we read did spark discussion, but in fact we did not wind up using very much from the texts. Gradually it became clear that our fantasy world could not be a place of random episodic adventures (“geek of the week” as we called it). We had to give our world a structure and a purpose; it had to be designed and built, in some sense, as an obstacle to Jay and his wishes. It had to be systematically opposed to him somehow.

Because Warren and I shared an interest in world problems and political philosophy, we tended to talk about these things and get excited about adapting these ideas to our show. Gradually the idea of kids running a kind of authoritarian police state began to emerge. What could provide more conflict and danger for our hero than that? At the same time, what could be more creepy and more comic than the idea of teenagers running a police state? We loved this idea.

In some ways the real test of our series idea was episode 2–the equivalent of a recording artist’s “sophomore album” or a novelist’s “sophomore book”. If you have a great first CD or book, you’re under huge pressure to replicate your success with your second effort. Most artists who make a big splash with their first effort fail at their second. We didn’t want this to happen to us–and, I’m pleased to say, it didn’t.