I continue to work on the climax of The Age of Pisces. I think I have the main climax pretty much roughed in, and I’m focusing on a subplot climax for the same character. In the process of working on this, I discover how much I don’t know about my story or its characters, which shocks me, considering how long I’ve been working on this thing. But that’s reality, and the only cure for ignorance is to seek truth—or at least to seek information. 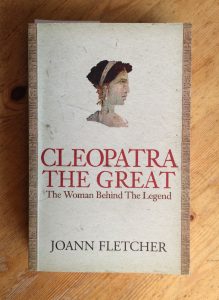 Her biographies were written by the victors

This search takes twists and turns as I reach for materials from which to build my story. Years ago I realized that Cleopatra—yes, that Cleopatra, Cleopatra VII Philopator, final monarch of the Ptolemaic empire of Egypt—was a character in my story. I thought that she was a minor character for me, though, so I didn’t spend much effort on learning about her. When I visited Chapters bookstore at Park Royal in November 2008, and saw Cleopatra the Great: The Woman Behind the Legend by Joann Fletcher on a shelf there, I felt that the relatively steep new-book price (the Canadian equivalent of the preprinted cover price of £12.99) was too high to justify the expense, and left the book behind. But when I got home I had qualms about my decision, and when my wife asked me a few days later whether there was anything she could pick up for me while she visited Park Royal, I said yes, and that day I took possession of a copy of Joann Fletcher’s book.

I read about two thirds of it at the time—as far in Cleopatra’s life as I saw my story taking me. I enjoyed reading it, appreciating the author’s well-informed and passionate style and her wish to push back against the negativity associated with Cleopatra from a long line of more or less hostile histories. The book is filled with many interesting details and asides, and Fletcher makes bold to fill in gaps in the record with plausible conjectures and shrewd inferences, all of which I really liked. But as other, more pressing research questions came to occupy me I shelved the book in the ancient-history section of my office bookcase, where it rested until about 2 weeks ago, when I discovered that Cleopatra was becoming a bigger deal in my story.

Now I’ve pressed on almost to the end; indeed, I’m all the way to the epilogue, with only 20 pages left to read—but the book is again being pushed aside by other more urgent reading! Thus my reading life. Nonetheless, I intend to finish it this time, for even though Cleopatra’s death in 30 BC is well after the end of what I’m calling Season 1 of The Age of Pisces, the events surrounding that end are key in forming my own theory of Cleopatra’s motives and actions in life.

Is it too much of a spoiler to say that in my story Cleopatra forms the intention of becoming the queen of the world, originally with Julius Caesar as her coruler and later, after Caesar’s death in 44 BC, with Mark Antony? There are grounds for believing, as Joann Fletcher suggests, that Cleopatra saw herself as a direct descendant of Alexander the Great, the first and only emperor to rule over both West and East (as far as was then known), and that her ambition was to restore his domain with the help of Roman power.

I believe further that Cleopatra saw the birth of this new world empire as coinciding with the imminent astrological Age of Pisces, which was to dawn in the latter half of the first century BC. Cleopatra and her son by Julius Caesar, Caesarion, are prominent in the artwork at the temple of Hathor at Dendera, 60 km north of Luxor, which is famous for the zodiac carved there on the ceiling of the Osiris chapel. After the Alexandrian War of 47 BC, in which Julius Caesar defeated the forces of Cleopatra’s little brother Ptolemy XIII and installed her on the throne of Egypt, Caesar famously took a prolonged voyage up the Nile with his new mistress the young queen—a leisurely trip that puzzled his countrymen, since he was still embroiled in a civil war for control of the Roman Empire. It’s not recorded exactly where they went or what they did, but I believe they traveled to Dendera, and there conceived their world empire for the new Age of Pisces (their son Caesarion had already been conceived, and would be born about 3 months later).

When Caesar was assassinated, his will made the unusual provision of posthumously adopting Octavian as his son. But Caesar already had a son: Caesarion in Egypt, thought to be a descendant of Alexander the Great on his mother’s side and of Venus on his father’s, for the Julii regarded themselves as the offspring of that goddess. When the forces of Octavian finally defeated Antony and Cleopatra in 31 BC, he had to make sure that the line of Caesar was clear and single—and passed only through himself. Caesarion, aged 17, was accordingly executed. (In this he was unlike his mother, whom Octavian wanted preserved alive to be displayed in his triumph in Rome. To prevent this humiliation, Cleopatra killed herself, as did her personal maids, but not, Fletcher surmises, with an asp, as ancient writers supposed, but probably with poisoned hairpins.)

This was the real birth of the emperor who would come to be called Caesar Augustus, and of the Roman Empire itself, properly so called. In a certain sense Cleopatra could be called its mother, who died in childbirth. Her vision of a cosmic, world-spanning empire that embraced a divine mission would happen in an unexpected way: by the flowering in Rome of a strange new religion from the East.