Posted on 8 September 2019 by Paul Vitols

I’ve been working on the climax of my epic-in-progress, The Age of Pisces, and I’ve been at it for some months now. There’s a lot to think about.

For one thing, The Age of Pisces is to be a multivolume work. At this point, I don’t know exactly how many volumes I’m looking at, but I would say at least 5, but more likely 7, and that’s just to take it through the first leg of the journey—what I’m calling Season 1. So the climax has a lot of story to tie up.

It is also conceived as a multi-character work: that is, I plan to have several protagonists or point-of-view characters. Their stories interweave, creating complex interactions and echo effects in the overall narrative. How is all that to resolve?

Then there is the idea content of the work: my story is about things. What is my story saying at its most fundamental level? Whatever it’s saying must be expressed most strongly and decisively in the climax—indeed, that is what the climax is: the revelation of the true meaning of the work. How clear am I on what that is?

Another factor affecting climax creation is the amount of story I have already created or established. You need to know enough about your story to be able to craft its climax, which means you need to have developed it quite far already, I would say. Where is it going to take place? Who exactly is going to be there, and why? What are the issues at stake? Are there to be any key props involved? These things will come to light in the course of working on the story from the front end: from the beginning.

I have written climaxes before, even some quite effective ones, in the course of my writing career, but I have never known as much about storytelling as I do now, so I find myself taking the process even more seriously, and also learning a lot more from it. Learning what? you might ask. One thing is patience.

I’m already a patient writer. I work slowly and my projects take much time to bring to fruition. I think carefully about things and never rush. So how am I learning patience from climax-crafting? In a couple of ways. One is not to give in to the desire to be the first audience for my story and thus eager to discover “what happens, how it turns out.” The desire to see the story resolved could lead to taking shortcuts: not doing all my research, for example, on the time and place of my story climax, to become expert in its qualities and its layout. Ignorance about my story world means having a smaller toolkit with which to build my story. 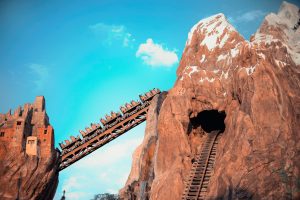 Heading for the top—wherever that is . . .

Another test of my patience is not to call a premature end to my story just because I have found what seems to be an exciting and fitting resolution. The writer needs to keep asking: Can I push this further? Have I taken this to the end of the line? Just as stories can have false starts, they can also have false ends: moments that feel pretty resolved, but which do not actually express the full meaning of the story in the strongest possible way. If you rack your brain, you can find ways to push the conflict higher, take the action further. If you can do that, it means that the peak you found was not the final summit—and your story is not done until you find that final summit.

Interestingly, the word climax itself comes from the Greek klimax, which means “ladder.” Originally this was used metaphorically for a figure of speech in which a series of statements is arranged in order of increasing force. This is in keeping with Robert McKee‘s idea of the cardinal rule of all temporal arts:

Thou shalt save the best for last.

According to John Ayto in his Dictionary of Word Origins, in the late 18th century climax came to refer to the endpoint of the process—where the ladder was taking you—rather than to the process itself. I think it’s good to remember the original meaning when one is crafting the endpoint of one’s story. Here too there is a process involved, and it is appropriate to take meticulous care with it.

In plotting my story’s climax I have gone through a number of false ends, and have been astonished a few times to find new life in the story when I thought I had it wrapped up. I kept thinking: “How can I take this further?” and an answer would come to me. At times it was frightening, for the story was taking on a life of its own and dragging in elements that I was not prepared for. The world of my story was becoming expanded beyond the boundaries I had imagined.

But when you do find that final peak, everything becomes stark and clear, like a landscape illuminated by a lightning flash. You might look on it with a certain wonder and think, “So this is what I’m really talking about!”

If you’re honest with yourself, I think you know when you’ve reached this moment. You know that you have found the final statement and meaning of your story; there is nowhere further to take it. The false peaks before it felt final because each one was the highest yet, and to go further might take your idea into strange and frightening places—outside the box you had imagined you were playing in. To press on means to let go and lose control. Climaxlike, no?

When you finally have it, you also have the key characters, ideas, props, and images that need to appear throughout the story. When you go back to the beginning again, you can start seeding them in and trimming away other less central things.