novel vs. novel 2: men with attitude

Back in August I wrote a post in which I compared two random novels that I happened to have read back to back. Well, that was so much fun I’m going to do it again.

How do I happen to choose the fiction I read? The works come to my reading list (a document I keep on my phone) from various sources, which I then read in the order in which they were added, because that’s the kind of person I am. Today’s brace of novels are A Man Called Ove by Fredrik Backman, published in 2012, and Wilhelm Meister’s Apprenticeship by Johann Wolfgang von Goethe, published in 1795–96. The former was recommended to me by an old classmate of mine when I met him at a high-school reunion in 2017; the latter came I remember not how, but probably from some book or article that was talking about Goethe’s views on art. Anyway, Goethe is one of the Great Books authors, and so I have a predisposition to reading his works. 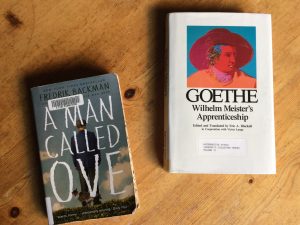 So: another random juxtaposition, which perhaps might not seem fair to either author. But I think it is fair, just because I did read them back to back, and because I think any work of poetry, of creative writing, of storytelling, can be compared with any other.

Despite their seemingly great differences, there are commonalities between these books. They are both works in translation, for one thing—Ove from the Swedish and Wilhelm from the German. And they are both about men: title characters with strong outlooks on life. Ove is a grumpy 59-year-old widower who is set in his ways; Wilhelm Meister is a young man with a romantic, philosophical nature and a passion for theater. And the two books, in very different ways, are comedies, at least in the most basic sense of having (mostly) happy endings. There are ironies in there, but I don’t want to be a spoiler so I won’t go into that further.

Unlike last time, I finished both these books, which meant that I considered them both to be good enough to be worth reading, and I wound up giving them both 4 stars out of 5 on Goodreads. So I’ve had some pretty happy reading lately.

He drives a Saab. He’s the kind of man who points at people he doesn’t like the look of, as if they were burglars and his forefinger a policeman’s torch. He stands at the counter of a shop where owners of Japanese cars come to purchase white cables. Ove eyes the sales assistant for a long time before shaking a medium-sized white box at him.

The assistant, a young man with a single-digit Body Mass Index, looks ill at ease. He visibly struggles to control his urge to snatch the box out of Ove’s hands.

Ove gives the box a skeptical glance, as if it’s a highly dubious sort of box, a box that rides a scooter and wears tracksuit trousers and just called Ove “my friend” before offering to sell him a watch.

Here we have comic writing that is quite effective. By the end of the third sentence we already have a strong impression of the character; indeed we may feel that we already know him as much as we want to. In most stories he would be a minor character whose grumpiness raises a few chuckles as we pass by, following other characters who are more engaging and likable, but here he has the starring role. What gives?

Ove’s grumpiness is offset by the comic detachment of the narrator. The author shows himself to creative in coming up with unexpected and illuminating figures of speech, such as the simile about the policeman’s torch, or “the owners of Japanese cars,” which is the figure known as antonomasia, the use of an epithet instead of a proper name. This points back to the second sentence, contrasting these people with the Saab-driving, and thus patriotic, Ove. The sales assistant is described as having “a single-digit Body Mass Index,” an instance of hyperbole, as well as, perhaps, prosopographia, the lively description of a person. All of these make the book’s opening vivid and suffused with the main character’s attitude.

Now let’s look at the opening of Wilhelm Meister’s Apprenticeship:

The play lasted for a very long time. Old Barbara went to the window several times to see if the coaches had already started leaving the theater. She was waiting for Mariane, her pretty mistress who was that night delighting the audience as a young officer in the epilogue—waiting for her with more impatience than usual, when she merely had a simple supper ready. For this time a surprise package had come in the mail from a wealthy young merchant named Norberg, to show that even when he was away, he was still thinking of his beloved. A trusty servant, companion, adviser, go-between and housekeeper, Barbara had every right to open the package. And this evening she could not resist, for the favors of this generous lover meant even more to her than they did to Mariane. To her great delight she found in the package not only fine muslin and elegant ribbons for Mariane, but for herself a length of cotton material, scarves and a roll of coins. She thought of the absent Norberg with great affection and gratitude, and eagerly resolved to praise him to Mariane, to remind her of what she owed him, and of his hopes and expectations that she would be faithful to him.

Interestingly, this story about a young man opens on a scene featuring women, specifically the servant of an actress. The narration is much less immediate than that of the modern A Man Called Ove; where Ove’s narrator steeps us in the hero’s view of the world, even if it is at a comic remove, here the narrator is disinterestedly telling us about the action. There may be a touch of irony—when the narrator says “Barbara had every right to open the package,” he is certainly expressing Barbara’s point of view, but it’s not quite clear whether he is expressing his own as well—but overall there is a feeling of calm detachment.

These books are comedies, and one of the hallmarks of comedy, as I learned by reading Edith Hamilton’s excellent book The Roman Way, is that the story portrays typical situations, for people only laugh at what they recognize. This is what makes comedy especially useful for historians, including ancient historians such as herself. Here we have the modern grumpy Swede Ove at a loss in a computer store, a situation typical of our current tech-obsessed society. But in 1795 Germany, the typical situation portrayed is that of an attractive actress, her sugar-daddy admirer, and her go-between personal maid who has her own stake in the relationship. In Goethe’s day this situation would have been familiar to readers and would have set up a number of expectations based on that familiarity.

But despite certain similarities, these two stories are as different in their respective missions as they are in their narrative styles. A Man Called Ove is a character study, the story of a man who is pulled from a living death back to engagement with life by the caring people around him. Wilhelm Meister’s Apprenticeship, though also concerned with its hero’s character, is much more a novel of ideas. It addresses the issues of education and vocation in the widest sense, and often depicts thoughtful, educated characters discussing and disputing points in these subjects. Based in part on these interactions, Wilhelm switches vocations a couple of times in the course of the story, wavering between his passion for art and his sense of responsibility to the bourgeois world that produced him. His path is shaped too by his overwhelming attraction to certain women. His “apprenticeship” is long and has many twists and turns.

These books are both comedies, but in most respects are as different as can be. To be honest, I had some credibility problems with them both. In Ove‘s case, I found many of the characters to be too cartoonish and unbelievable. Too many people seem to warm up to Ove, who really is a prickly customer. The developments are also rather predictable.

In Wilhelm‘s case, there are too many strange coincidences and mysteries. While Goethe is a master of creating believable surprises, truly unexpected and lifelike twists, he also brings in far-fetched and incredible developments. The story as a whole cannot really be called believable, even extending the author all the credit you can. But Goethe can be funny, although in a completely different manner than Backman. I laughed out loud at some of Wilhelm’s passionately delivered criticisms of actors and their lifestyle. I’m sure his observations would apply just as much today as they did then.

Bottom line: I liked these books quite well. What’s next on my reading list? Watch this space.