novel vs. novel 3: souls in chains

The last two novels I read were The Day of the Locust by Nathanael West and Uncle Tom’s Cabin by Harriet Beecher Stowe. Again, I do my best to read the novels on my reading list in the order in which they’re added; something about this approach, which feels both systematic and random, gratifies me. Does it put me somewhere on an OCD spectrum? Ah well, it’s harmless—and it’s fun! 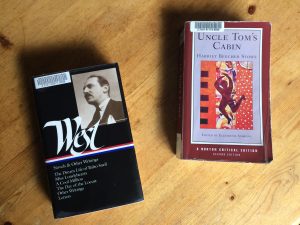 Here again we have two works that appear to have very little in common, one a short work published in 1939, the other a more massive work of “activist” fiction published in 1852. They both qualify very well, though, as Americana: West’s novel looks at a few obscure denizens of the Oort Cloud of bit players, wannabes, and parasites of 1930s Hollywood; Beecher Stowe’s novel takes aim at the polarizing institution of slavery as it existed in the United States of the early 1850s. Locust is humorous, ironic, dark, and apocalyptic; Uncle Tom is passionate, self-assured, spiritual, and heartfelt.

Let’s look at how these two novels open. First, The Day of the Locust:

Around quitting time, Tod Hackett heard a great din on the road outside his office. The groan of leather mingled with the jangle of iron and over all beat the tattoo of a thousand hooves. He hurried to the window.

An army of cavalry and foot was passing. It moved like a mob; its lines broken, as though fleeing from some terrible defeat. The dolmans of the hussars, the heavy shakos of the guards, Hanoverian light horse, with their flat leather caps and flowing red plumes, were all jumbled together in bobbing disorder. Behind the cavalry came the infantry, a wild sea of waving sabretaches, sloped muskets, crossed shoulder belts and swinging cartridge boxes. Tod recognized the scarlet infantry of England with their white shoulder pads, the black infantry of the Duke of Brunswick, the French grenadiers with their enormous white gaiters, the Scotch with bare knees under plaid skirts.

While he watched, a little fat man, wearing a cork sun-helmet, polo shirt and knickers, darted around the corner of the building in pursuit of the army.

“Stage Nine—you bastards—Stage Nine!” he screamed through a small megaphone.

There’s a lot here. It starts in seeming confusion, with some kind of military rout taking place outside a man’s office. The scene pays off with the comic revelation that these are actors—we’re in Hollywood. The narrator lingers with a certain obsessive glee over the details of the soldiers’ kit, and it’s not completely clear whether this glee is the narrator’s own or Tod Hackett’s; but as the book goes on, the narrator will show a continuing concern with how people dress and groom themselves. I sensed that this was a preoccupation of West himself, a man who died young (age 37) in a car crash, but it is a fitting concern too for image-obsessed Hollywood. The question simmers implicit: what’s underneath the clothes? Anything?

The first sentence is constructed with care; let’s take a look at it:

Around quitting time, Tod Hackett heard a great din on the road outside his office.

Quitting time is the time we knock off work, but it could also refer to a time when we give up a job or the pursuit of a dream; it can also serve as a metaphor for death. All of these notions will prove relevant to the coming story.

The character is named Tod Hackett. According to Wikipedia, the name Hackett is thought to derive from hake, a codlike fish. But the verb phrase hack it means “to cope” or “to be successful,” and, again, both these senses will prove relevant. The name Tod means “fox,” but it’s also German for “death”; and this feels the more relevant, since Tod is more usually spelled Todd. In the first five words, then, we have the issues of life and death, success and failure.

The great din on the road foreshadows events in the climax of the novel. It suggests public disorder, rioting, or at least partying. A din is “a welter of discordant sounds”: sound without meaning, sense, or purpose. Noise. It is loud without communicating anything. As for the road, it was built to go somewhere, but here it is merely a place where disorder is happening; it’s not going anywhere. Tod first hears the din, then looks out on the seeming rout. He is a witness to it; and this too points to his function in the story ahead.

All of that is in the first sentence, which tells us that The Day of the Locust is a significant literary work.

Now let’s look at the opening of Uncle Tom’s Cabin. Chapter 1 is entitled “In Which the Reader Is Introduced to a Man of Humanity”:

Late in the afternoon of a chilly day in February, two gentlemen were sitting alone over their wine, in a well-furnished dining parlor, in the town of P——, in Kentucky. There were no servants present, and the gentlemen, with chairs closely approaching, seemed to be discussing some subject with great earnestness.

For convenience sake, we have said, hitherto, two gentlemen. One of the parties, however, when critically examined, did not seem, strictly speaking, to come under the species. He was a short, thick-set man, with coarse, commonplace features, and that swaggering air of pretension which marks a low man who is trying to elbow his way upward in the world. He was much over-dressed, in a gaudy vest of many colors, a blue neckerchief, bedropped gayly with yellow spots, and arranged with a flaunting tie, quite in keeping with the general air of the man. His hands, large and coarse, were plentifully bedecked with rings; and he wore a heavy gold watch-chain, with a bundle of seals of portentous size, and a great variety of colors, attached to it,—which, in the ardor of conversation, he was in the habit of flourishing and jingling with evident satisfaction. His conversation was in free and easy defiance of Murray’s Grammar, and was garnished at convenient intervals with various profane expressions, which not even the desire to be graphic in our account shall induce us to transcribe.

His companion, Mr. Shelby, had the appearance of a gentleman; and the arrangement of the house, and the general air of the housekeeping, indicated easy, and even opulent circumstances. As we before stated, the two were in the midst of an earnest conversation.

Here we have a much different narrator, although the narrators do share certain traits, and indeed the two openings are not as different as they may appear. One big difference is that West is a self-conscious literary artist, while Beecher Stowe is not. Beecher Stowe’s first sentence is not packed with symbolic meaning; it is scene-setting, plain and simple. But her narrator, like West’s, is a humorist; but the glee that West’s narrator lavishes on the faux soldiers of his scene is lavished here instead on the kit and comportment of one of the characters (whose name will prove to be Haley). And while West’s narrator comes across as a bemused student of militaria, Beecher Stowe’s is a right-thinking, middle-class Christian woman who knows who is who and what is what. Her arch references to Haley’s vulgarity are funny, like watching a prim but knowing schoolteacher hold up a stink-bomb with a pair of tongs. She knows these men, Shelby and Haley, inside and out; she knows them better than they know themselves.

West, the literary artist, has more recourse to figurative language than does Beecher Stowe. His short first paragraph contains the groan of leather and the tattoo of a thousand hooves: instances of metaphor and hyperbole (unless there really were 250 horses out there). And as Locust proceeds, striking figures of speech pop up repeatedly to jolt the imagination. Uncle Tom’s Cabin makes relatively little use of figures; its power derives from its plain portrayal of a fascinating and emotionally charged world.

On Goodreads I wound up giving The Day of the Locust 4 stars, while I gave Uncle Tom’s Cabin 5 stars. I appreciated West’s artistry and looked on with a mixture of amusement and horror at his depiction of anomie in the wasteland surrounding the Hollywood dream factory, but when I read Uncle Tom’s Cabin I laughed, I wept, and I was inspired. What would Uncle Tom make of the “free” white folks blundering their way through life in West’s Hollywood? Tod Hackett develops a fixation with a sexy walk-on actress; when he gets drunk he even considers raping her. Uncle Tom would no doubt shake his head. He may not be much at reading, but he understands clearly that freedom means, first of all, freedom from sin; if we have that, then our soul is emancipated, and what happens to our body is a comparative trifle. The characters in The Day of the Locust have a certain complexity, but they’re shallow; Uncle Tom is simple but deep. We all need to tend to our souls—even if we don’t think we have one.