the hermit (crab) comes out of his shell again

Today I finally caved and bought some new writing software. After spending a few days acquainting myself with a trial version of Scrivener, an all-purpose rough-draft-generating application produced by a writer-turned-developer (or vice versa) named Keith Blount in 2007, I decided to take the plunge today, paying $62 to turn my 30-day trial version into a lasting commitment. (One beef: I never found out the price of the product until I started the transaction to buy. I hate it when online vendors conceal the prices of their products.) 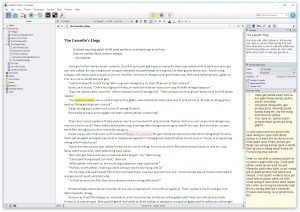 The next big thing (for me)?

To some extent this is an act of faith, since I can’t be sure that this product will work out for me and my specialized and large-scale needs. I may be a far-seeing visionary, but when it comes to the tools of my trade, or indeed to products and possessions generally, I tend to hang on to what I’ve got and keep using it while it is still serviceable. This minimizes my costs while also keeping my environmental footprint small. And it is efficient, for I am always using stuff that I know works; I also become adroit with it through long habituation. For me, it’s an arrangement that makes total sense: convenient, reliable, low-cost, low-stress.

But just as hermit crabs reach a point when, outgrowing their existing shell, they must abandon it and find a new one discarded by some bigger neighbor, so I too arrive at moments when I feel the need to upgrade.

Looking back, I see a life history punctuated with definite upgrades. Probably the first one was graduating from pencil to ballpoint pen. My little sister Mara and I were forbidden to use pens. The wild Schmidt boys across the street were allowed to use pens, and they wrote all over the walls. That wasn’t going to happen in our house. I don’t remember exactly when I graduated to a ballpoint pen for writing, but I expect it was in grade 4 (age 9), when I entered the hothouse school program called Major Works.

Next upgrade: a typewriter. I had wanted to be able to type for as long as I could remember, and enjoyed playing with the old manual typewriter at my father’s place. My aunt Jackie let me have the use of her portable manual Olivetti Underwood, and eventually gave me a little desk to put it on. When I entered grade 8 (age 13), I took a 5-month typing course and became a touch typist. I became proficient and eventually attained a speed of over 70 words per minute. It’s a skill I make use of every day.

Next: an electric typewriter. The year was 1984 and I was 25 and had a job at the Insurance Corporation of B.C., which paid quite well. I had also become a stringer for Cinema Canada, a magazine based in Montreal. I was submitting articles there and also wanted to do serious writing of my own; in my mind I was definitely a career writer. So I went up to Polson’s, a large office-equipment store on Broadway at Cambie Street, and bought myself a big, smooth-working typewriter, an All AS300 (it still rests under a dust cover on a nearby shelf). I paid about $640 for it—a substantial sum in those days. But I could afford it, I regarded it as a mark of my seriousness of purpose, and I never regretted it. It was and is a fine machine.

But it was the 1980s and a revolution was happening in computing: the personal computer had been born. I remember being sent on a training session at ICBC for a product called Microsoft Word. I loved being able to type onto a big, TV-style screen, to backspace, correct, cut, and paste. Wow! Now this was living! Between the corporate exercises I tried typing sentences from my own creative works; it was exciting to see  them appearing in white type on the black screen. When Warren Easton and I got our TV series The Odyssey into development in 1989, we bought a PC together, which lived in my home office, since that was where we worked. It contained a copy of Word much like the one I had been introduced to at the insurance corporation. Yahoo—I had upgraded again! That PC (I forget the brand) took us through The Odyssey.

I became accustomed to writing with a word processor. The 1990s came, and with them a strange new phenomenon called the Internet. People starting “surfing” something called the World Wide Web. By 2000 Kimmie and I decided that we wanted to see what all the fuss was about; we bought a new, Internet-capable computer, this time from Dell. I ordered it over the phone and it was delivered to my house—sweet! I plumped for the biggest monitor they offered, a 16-inch Trinitron, figuring I would get the biggest and the best (it cost around $1,000, as I recall) so that it might last while technology kept advancing around me. And it has—I’m staring into it right now as I type these words in 2020. No regrets. The computer came with Office 97, the latest offering by Microsoft at the time. This represented another writing-technology upgrade, but it was incremental rather than a game changer.

A few computers have come and gone since then, mostly boxes assembled from components in local computer stores, the most recent one a brand-new Hewlett-Packard offered by a generous friend who was winding up a computing business (thanks, Daniel). But I have installed my old copy of Office 97 on all these machines, because I was familiar with the software and because I could do so for free. My writing has rumbled on, powered by this technology. My magnum opus, The Age of Pisces, exists as a legion of Word documents in a Byzantine array of folders within folders. I keep track of it all in my head.

I first heard of Scrivener a few years ago, and had given it a couple of cursory looks online. I had tried a couple of other software packages, attracted by the idea of a single application that would help me manage all aspects of my writing projects, but these proved unsatisfactory and I retreated back to Word, which I know so well. The experiments cost me some lost time and effort. I decided to forget about “writing software,” thinking it to be perhaps a solution in search of a problem.

But my same tech-savvy friend Daniel gently suggested that I might want to give Scrivener a closer look, so I did. And I have decided to buy. Will this prove to be another technological upgrade for my personal writing craft—or another dry well which I will have to abandon? I’m guardedly optimistic. I think Scrivener is going to help me bring together my creative and organizational talents so that I can get my projects built and out the door.

Full disclosure: the links on this page to Scrivener are affiliate links. That means whenever you click on one, you’ll be taken to the Literature and Latte website. Then, if you decide to buy Scrivener, I receive a small commission.