life, art, and the cosmos

It’s Saturday morning and I’ve just finished doing my daily typing of yesterday’s notes—that is, the highlighted text from yesterday’s afternoon reading period. It’s how I start each day. It makes for a good, nonthreatening way to get my writing day going: a fairly mechanical task that I can do while nursing my hot lemon water and, later, decaffeinated coffee. I remember reading that John Steinbeck got his writing juices going each day by writing letters. Well, this is my way.

I tend to fall gradually behind with my typing. Since I can’t type as much as I highlight, I have to prioritize in the morning. I always start with my dharma notes; since I’m still at least notionally a Buddhist, this is my way of putting my spiritual life first in the morning. The dharma book I’m currently reading and typing is The Four Foundations of Mindfulness by the late Sayadaw U Silananda, a meditation master who was sent in 1979 by the Burmese teacher Mahasi Sayadaw to bring the Buddhist teachings to the West. This particular text, published by Wisdom Publications, is a commentary on a sutra in which the Buddha gives instructions on the meditative discipline of mindfulness.

My other notes this morning were from The Astral Body by A. E. Powell, a successor volume to The Etheric Body, which I reviewed in my previous post. This is the latest in a number of books I have read in the past year to try to learn about the actual nature and structure of the world we all live in.

My interest in this subject comes from two separate sources. One of these is the dharma. In my study of this, and also as I have answered a number of questions about Buddhism at Quora.com, I have become ever more acquainted with the Buddhist cosmology: the structure of the world as it is understood in the Buddhist teachings. In broad strokes, these describe the world as being divided into 3 broad realms or planes, which, translated into English, are, roughly, the Desire Realm, the Form Realm, and the Formless Realm. We humans live in the Desire Realm, along with animals, hell beings, so-called hungry ghosts, and certain classes of devas, a word which is generally translated “gods,” but which would include beings that we would call angels and demons, as well as other things such as fairies and gnomes, if such exist. In fact, the Desire Realm is divided into 11 separate categories of beings, who all share the trait of possessing five senses.

The Form Realm contains 16 categories of beings, all devas, and all with extremely long lifespans by our standards (those in the highest level, The Supreme, live for 16,000 aeons). Unlike the beings in the Desire Realm, these beings possess only two senses, those of sight and hearing. Another important point is that the bodies of all the beings in the Form Realm are composed of “fine matter”: a type of matter that is diaphanous, fluid, and extremely light compared to the coarse matter of which we humans, for instance, are made. It’s not yet clear to me whether all the beings of the Desire Realm are composed of coarse matter, or whether the devas of that realm, for instance, are composed of fine matter like the devas in the higher realms.

At the top is the Formless Realm, which comprises four categories of devas who, existing as purely mental beings, do not have bodies at all, and therefore do not have senses in the way that we understand the term. The devas in the highest level of this realm live for 84,000 aeons. 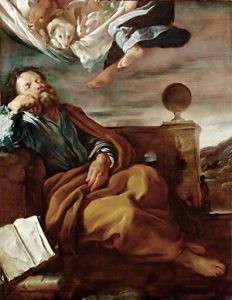 This brings me to the second source of my interest in this subject: research into the world of my story-in-the-making, The Age of Pisces. Years ago, when writing an early draft, I found that the story pushed me into giving one of my main characters, the magician Menahem, an out-of-body experience. At the time this was merely the solution to a plot problem for me, but as a consequence I had now introduced the notion of the nonphysical worlds into my story, and thus enlarged it accordingly. I had placed myself under the burden of working out what the cosmology of my story world is.

Over the years, as I have grappled with the story, this issue has become ever larger, deeper, and more complex. Increasingly my own story is challenging my fundamental beliefs and demanding that I sort them out. Doors in my mind are being thrown open to all kinds of things I never suspected I would inquire into or take seriously. Now I am inquiring into them—and taking them seriously. Reading A. E. Powell’s books on the Theosophical doctrines is part of that.

It’s too soon to say that I have a position on these matters. There is not a specific doctrinal system that I could say I subscribe to 100 percent. But I am convinced that the purely materialistic view of the world that I grew up with is mistaken, and I am coming to see that many people have had more or less deep glimpses into and even sustained visions of the true nature of the wider reality in which we all live. For the sake of both my art and my soul (or whatever rests in the place we point to with that word) I want to learn all I can. Meanwhile, The Age of Pisces continues to push me further into this inquiry, and it actually makes decisions of its own as to what is real. For my duty as an artist, in this case as a storyteller, is to choose whatever contributes to the power, beauty, and unity of my creation. Whatever maximizes the effect is the choice I must make, and thus world of my story dawns as a surprise to its own creator.

Whatever else happens, I will continue to hit the books.