All right, I was talking about examining the opening sentences of novels that I read and comparing them with the “zero level” opener to Edward Bulwer-Lytton’s 1830 Paul Clifford, the infamous, “It was a dark and stormy night. . . .” The latest novel I’ve read is Pastwatch: The Redemption of Christopher Columbus by Orson Scott Card, published in 1996. It’s a science-fiction work about people from the future (the 22nd century, I think) traveling to the time of Christopher Columbus to see whether they can head off what they regard as the disastrous consequences of his journey of discovery to the Americas. This book, for me, had some problems, but I’m not here to review it as a whole, only to look at its opening sentence.

But first there is the question of what actually is the opening sentence. This novel, like many novels, comes equipped with a prologue. It’s 2 pages long and sets the scene before the launch of the story proper, and is really the beginning—the opening—of the novel. For your interest, here is the sentence in question:

Some people called it “the time of undoing”; some, wishing to be more positive, spoke of it as “the replanting” or “the restoring” or even “the resurrection” of the Earth. 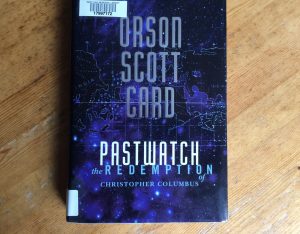 The journey of 100,000 words begins with a single sentence.

I’ve decided not to use that sentence. All things considered, I believe it is more consistent and fair to use the opening sentence of chapter 1 for each book, even for books that have prologues. This to me feels more like an apples-to-apples comparison. Every novel will have a chapter 1, and every chapter 1 will have an opening sentence. So there, I have begun to establish the “rules” of my survey!

Let’s move on to chapter 1 of Pastwatch, then. The chapter is entitled “The Governor,” and here is the opening sentence:

There was only one time when Columbus despaired of making his voyage.

How does it hit you? For my part, I think it’s an effective opener. At 12 words long, it’s brief and to the point. It’s talking about Columbus and his voyage, both famous and familiar, but it refers to his despair about making the voyage, which is something I did not know about, and this introduces an element of conflict. What would have made Columbus despair? How did he overcome the obstacle? My desire to know these things makes me want to read on.

If I treat this sentence as a hologram of the novel as a whole, what is it telling me about the story? What is the “implied book” suggested by this sentence? One thing this sentence leads me to expect is direct, businesslike narration. It’s not a florid, scene-setting descriptive sentence, like Bulwer-Lytton’s opener to Paul Clifford; it is a terse statement of fact. There is no figurative language here; it uses plain, literal prose, just as a police report might. So, even though I would expect the author to use figurative language in the novel ahead of me, since figurative language is the hallmark of creative as opposed to ordinary writing, this plainspoken opener gives me to understand that the narrative will be brisk and informative. The brevity of the sentence leads me to expect that the author will stay close to the point at all times.

Another aspect is what I might call the interest factor: how interesting is the situation that the sentence is, as it were, lowering me into? Here also I think it does well. Christopher Columbus and his voyage are a specific event in a specific time; they are historically significant and the author is referring to them in a way that suggests he has new and interesting things to say about them. As a reader, I get the feeling that the author has discovered some things of special interest or importance regarding this historical figure, and that he wishes to communicate to me his own excitement about them. I’m willing to read on and find out what he’s got to say.

In the event, I didn’t think that the novel really delivered on these implicit promises to me the reader. I felt there were long passages that were talky and did not do much to advance the story, and I felt that the story had a hard time getting onto its point and staying there. So in a certain sense I don’t think it lived up to the promise of its opening sentence. And this might make an interesting critical touchstone for the future: how harmonious is a novel with its opening sentence? Does it proceed in the manner of its opening? Does it stay true to itself, or anyway to the self it seems to promise in its opening words? Or, if not, is the difference handled in an artistic way, such that it makes sense in terms of the unity of the whole?

These will be questions I keep asking myself as I continue in my examination of opening sentences, and I invite you to ask them of the novels you read, too. In this way we will continue to deepen our appreciation of these works of art.