well begun is half done

It was a dark and stormy night; the rain fell in torrents — except at occasional intervals, when it was checked by a violent gust of wind which swept up the streets (for it is in London that our scene lies), rattling along the housetops, and fiercely agitating the scanty flame of the lamps that struggled against the darkness.

Thus the actual opening sentence of Edward Bulwer-Lytton’s 1830 novel Paul Clifford. Apparently the opening clause, “it was a dark and stormy night,” was not original with Bulwer-Lytton but was something that he himself was riffing on in his work, but nonetheless the Bulwer-Lytton Fiction Contest, launched by the English Department at San Jose State University in 1982 and carrying on to the present day, has made it the standard for their annual contest for writers to compose “opening sentences to the worst of all possible novels.”

This is not quite the same thing as “the worst opening sentence,” but the distinction is perhaps subtle. A “worst opening sentence” might simply be grammatically questionable or confusing or incomprehensible. An opening sentence to “the worst of all possible novels” needs to be clear and informative enough to let the reader know, or at least suspect, that the novel that follows will be as bad as can be. This raises interesting questions as to what makes for badness in a novel. There won’t be any unanimity here, for novels, like other things, can be loved and hated by different people for different reasons. One man’s trash is another man’s treasure.

But I think we can say that “bad” here will mean bad in the eyes of people studying literature at the university level, and even if they don’t agree with each other, there is likely to be more agreement than there would be among the whole mass of the literature-consuming public. And we shouldn’t forget that the contest itself is a joke; it’s mostly about having a laugh, and no one should take it too seriously.

All of that being said, where do I stand on the question of opening sentences in general, and on the opener to Paul Clifford in particular? I admit that I’m not fond of the sentence. It’s 57 words long, which is lengthy, especially considering the relatively violent action that it is intended to portray; and the longer the sentence, the slower the pace. Rain falling in torrents is a cliche today, but maybe it was less so in 1830; I don’t know—many of Bulwer-Lytton’s turns of phrase have become cliches. For me the worst part is the implausibility of the action being described: we’re told that a torrential rain was falling, but that the torrents of rain were being checked by gusts of wind. In my observation, wind can change the direction of rainfall, but it can’t do anything to slow, stop, or delay the fall of rain. There might indeed be gaps between episodes of more violent rainfall, but these won’t be caused by the wind. So the scene as described does not accord with my own experience of weather. My impression is that the author is not interested enough in weather to bother about trying to report it accurately. To him, weather is just this stuff that happens outdoors—who knows how it works? Who cares? More than likely, the author was simply looking for a way to combine heavy rain with strong wind in his setting, and used the first word that came to mind. 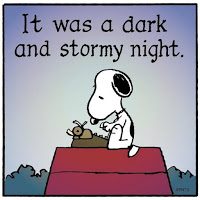 Well, and maybe it was.

Either way, whether through lack of comprehension or lack of care, the apparent difference between the narrator’s understanding of the world and my own creates a disconnect between us. How can I trust this person’s observations in what follows? He can’t even get the weather right. If I take the opening sentence as a hologram of the book as a whole, then I’m looking ahead to a work that is overlong, poorly observed, and carelessly constructed. Why press on, when there are so many other books in the world, some of which are good, and a few of which are excellent?

If it were my sentence, I think I would cut everything after the opening clause, and just keep

It was a dark and stormy night.

This sets the scene quickly and simply in seven words. The brevity makes for a brisk pace, and the narrator conveys a sense of wanting to get to the point and not waste the reader’s time. The sentence has become infamous so it’s hard to look at it with fresh eyes, but I think that if I had never seen it before, I would find it serviceable in a plainspoken way. I’d be willing to read the next sentence and see what was to follow.

I’m thinking of assessing the opening sentences of the books I read, using Bulwer-Lytton’s sentence as a benchmark. Will it stand as the zero of my scale, or might I find others that are worse, and which rate a negative score, as happened with the Fahrenheit temperature scale?

I’ve just started reading the novel Pastwatch: The Redemption of Christopher Columbus by Orson Scott Card. Shall we see how his opening sentence compares with Bulwer-Lytton’s? Yes, I think we shall.