another first: The Floating Opera by John Barth

Another novel, another opening sentence. This post is about the opener for The Floating Opera by John Barth, first published in 1956 when the author was 25 years old.

And how did I come to read The Floating Opera just now? Well, when I bailed early on my previous book, The Amber Spyglass, I needed something else but had no other library book at hand. I came up with a brilliant and exceedingly original idea: what if I read a book from my own library—one that I had not read before? 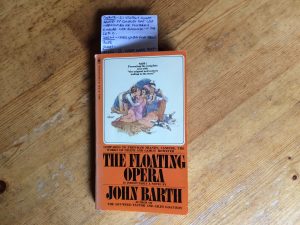 I changed my mind, and decided to read it.

Rather impressed with myself for thinking of this, I climbed the stairs to the master bedroom where my (Billy, Ikea, natch) fiction bookcase stands. Being of an orderly and programmatic cast of mind, I decided to start at the top left, and read the first unread novel that I came across. My fiction bookcase is arranged alphabetically by author, so it didn’t take long for me to hit on The Floating Opera. There it was: a nice, pumpkin-colored Bantam mass-market paperback. It had been there for a while. How long exactly? I checked the first page, and discovered that I’d bought it in September 1980. Gosh, at that time I was living in a duplex apartment on Vancouver’s East Side with my friends Brad and Keith, and working evenings as a janitor at Vancouver General Hospital. But I could not recall where I had got this book. I’d bought it because I had quite enjoyed Giles Goat-Boy, a later novel by Barth about a young fellow who is the offspring of a goat and a computer. And I do dimly recall buying that book: it was at a bookstore far out on West 10th Avenue, near UBC, quite possibly during my brief and undistinguished career there. I have a faint memory of seeing it in the big picture window at the front of the store. That was probably during winter or spring 1980; come late summer, I was ready to buy more Barth.

But not, apparently, to read him—that would take another 40 years (sorry, John!). Now, finally, in AD 2020, the stars lined up and I was ready to poke my older nose in this paperback. And what did I find? Here is the opening sentence of chapter 1, which is titled “Tuning My Piano”:

To someone like myself, whose literary activities have been confined since 1920 mainly to legal briefs and Inquiry-writing, the hardest thing about the task at hand—viz., the explanation of a day in 1937 when I changed my mind—is getting into it.

It’s another longish one: 44 words (43 if you count “Inquiry-writing” as one word)—just one word less than the opener of The Amber Spyglass by Philip Pullman. But in my opinion this one has much more going for it. For while there is no figurative language here—no poetry—there is plenty to engage the reader’s interest and encourage a certain sense of trust in the narrator.

For one thing, there is quite a bit of information given and implied. We learn that the first-person narrator has been a lawyer for about 35 years (if the book is taken to be written close to its publication date) and does not regard himself as an experienced writer outside that field. We are served notice of some document or publication, called simply Inquiry, that he has labored on. And we learn what this story is ostensibly about, namely a day in 1937 when he changed his mind. The reference to the seemingly insignificant act of changing one’s mind—something that we all have done many times in our lives—actually heightens the interest, for it seems to imply that this change of mind was of such special importance that the narrator feels driven to describe it almost two decades later.

Then there is the core proposition of this complex sentence: that the hardest thing about this literary task is “getting into it”—starting it. It has a comic ring, for it is a bit paradoxical to note the difficulty of beginning while actually having, strictly speaking, begun. And the alert, well-read reader will note here an echo of a famous novel of the past, namely Tristram Shandy by Laurence Sterne, which was published between 1759 and 1767. In that tale Shandy, setting out to write the story of his own life, has a hard time getting even through the event of his birth. Time and again he worries that he will not live long enough to finish his story. Barth’s narrator expresses a similar kind of anxiety, and the reader familiar with Shandy will now be alert for other connections to that famous and strange work.

The echo of Shandy also alerts the reader that the current work may not play by the rules of standard narrative, that it may well be in some way “modern” or even “postmodern,” whatever we might take those words to mean. And here I don’t think it’s spoiling anything to say that the book delivers on this implied promise. Although the novel is narrated engagingly and very ably, it is a work of ideas and it will sacrifice the rules of storytelling on the altar of its supposedly higher intellectual mission. Despite its vividly drawn characters and keenly perceived situations, this is a book of the head and not at all of the heart, and, in this reader’s opinion, it suffers as a result.

But I have wandered far from the opening sentence! If I had read no more of the book than that, I would be left with a favorable impression, and curiosity as to how its tale unfolds. And an opening sentence that achieves those things I must term a winner.