They call me Mister Vitols

I don’t write every day, but I do read every day. The reading and processing of books is the central activity of my life. I am a student before I am anything else. I say this not from a sense of self knowledge or inner conviction, but on the basis of looking at my own life and behavior with objective eyes, as though I were someone else. What would I say about this guy if I were looking at him from the outside? Well, he calls himself a writer, but the most inflexible and sacrosanct parts of his day involve reading. Whatever writing he does is always worked in around that.

I don’t feel bad about this self-realization; on the contrary, I feel great about it. It’s a wonderful thing to be a student, and by student I mean not someone who happens to be attending formal classes at any given time, but someone who embodies what could be called the archetype of the Student. According to Caroline Myss in her book Sacred Contracts, we all embody a number of distinct archetypes, with different ones perhaps manifesting in the different areas or departments of life. But one will probably be central: our ruling archetype. And, looking at my own behavior, how I spend the hours of my day, I have to conclude that mine is the Student. Here is a compressed version of Myss’s description of this archetype: 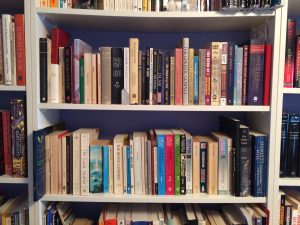 The University of Paul.

Yes, I would say that’s bang on. The phrase “an absence of mastery of any one subject” causes me some discomfort, but I have to acknowledge that in my case it is true. I lack the singleness of purpose of a master, and this does sometimes trouble me. But, on the other hand, I think about what a master must sacrifice in order to achieve mastery. One loses the wider view. And that wider view, acquaintance with a great range of things instead of only one thing, is a positive thing in its own right.

I recall that Joseph Campbell, one of my heroes, described himself as a “generalist”; he regarded himself as someone who surveyed a lot of terrain instead of focusing on one subject (even as he did achieve significant recognition in his earlier career as an authority on medieval literature and, I think, Sanskrit). While he earned a master of arts degree from Columbia University, he never pursued a PhD, the hallmark of the academic specialist. Throughout his life he was careful to correct people who addressed him as Doctor Campbell: “It’s Mister Campbell.”

But Joseph Campbell did become an expert, after all—an expert in mythology. He wrote some of the most powerful and inspiring works on that subject: The Hero with a Thousand Faces and The Masks of God. But his specialty was so vast that it required a bird’s-eye view of the whole landscape of human history, prehistory, thought, art, and religion. And that’s what he gained, a bird’s-eye view of the whole thing.

I would love to do the same, although not over exactly the same landscape. I’m inspired by Campbell’s work, but I’m not looking to follow in his footsteps. Campbell may have been a generalist, but he was still an academic; he spent his career teaching at Sarah Lawrence College in Yonkers, New York, next door to White Plains, the city of his birth. As a young man he tried writing fiction but abandoned it when he discovered he lacked the talent for it. My situation is different: I do have talent for writing fiction, and that is my point of departure for my life as a Student.

For it comes back to that; a Student is what I am at heart. But a Student still needs a motive and a goal, a principle of selection in what engages his interest and keeps him moving forward. He may go down many interesting byways—indeed he will, he must. Yes, he may even get lost there for a time and then find himself toiling to find his way back to the main track. And for this Student, that main track is my artistic project, my artistic career. But my fictional creations need to reflect my understanding of reality, and that understanding is in large part based on study.

Another archetype that is prominent within in me is that of the Teacher. Indeed, if any student sticks with something long enough he will become a teacher, even if only as an informal tutor to his classmates, sharing his notes. And it is best if the student’s researches are not for his own sake alone, but can also, in some way, benefit others.

So, as far as formal education goes, I’m a dropout. I left the University of B.C. before completing my first year. But my informal education has proceeded more or less uninterruptedly since then, and its central pillar has been the reading of books. I do it for hours each day; indeed I’ve taken breaks from it in order to draft this post.

And now I would fain return to it.

If you’re enjoying my website, you can help keep it going by contributing to its running costs. Tip me with PayPal or, if you don’t have a PayPal account, tip me with your credit card.