Before Machiavelli, there was the Bible

One of my several reading projects is to make my way through the Great Books of the Western World—the works selected by Mortimer J. Adler, Robert M. Hutchins, and their fellow editors for inclusion in the 54-volume set published by Encyclopedia Britannica in 1952. So far, I reckon I’ve read about two thirds of the set. Now my program is to go through the set in numerical or chronological order, reading the remaining works. I regard this as a lifetime task, and it’s one I enjoy very much. 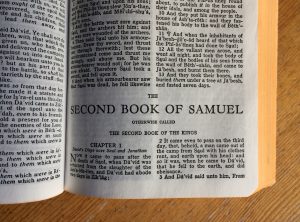 God decides to let the inmates run the asylum.

Included in their list of works, but not included in their published set, is the Bible, mainly because the Bible was already so widely available. It’s currently my Great Book at reading time—specifically the Second Book of Samuel, of which I’ve now read the first two chapters. To shed extra light on the journey I’m also reading a commentary on the two books of Samuel called The David Story by Robert Alter. Alter provides his own very good translation of the two books (Alter himself is an excellent writer) and more or less detailed background and observations on the text along the way. I read the biblical text first myself (King James Version), as carefully as I can, before consulting Alter’s version. It all makes for a really enjoyable and illuminating process.

As I proceed, a thought that keeps striking me with increasing force is how political these books are—and, come to think of it, all the books of the Bible are. If I try to clarify what I mean by that, I would say that they depict, in an unabashed way, how the important actors in this segment of sacred history, the history of God’s securing his own kingdom on Earth, are driven in their actions by naked considerations of trying to acquire and hold worldly power. The key figures of Samuel, Saul, and David are all presented as more or less flawed men, in some ways deeply so, who often commit vicious acts motivated by selfishness, vanity, and lust. And this even though Samuel is a prophet of God and Saul and David are both men hand-picked by God to rule as kings over his own chosen people, the Israelites. One wonders: Is this really the best God can do?

God himself comes across as ambivalent and as somewhat of a martyr. When Samuel protests to him that the Israelites, in demanding a king for themselves, are rejecting his own leadership as their judge, God confides to him that it is he, God himself, who is being rejected as their king. And God permits this! It’s as though his attitude is: “Fine, let them have their human king—let’s see how they like it!” He agrees with Samuel that it’s a crap idea, but he acquiesces in it. And as God more or less voluntarily abdicates the throne of Israel, the full maelstrom of earthly politics comes into play.

Can I give an example? Well, in chapter 3 of 2 Samuel, a quarrel erupts in the royal court of Israel when Ishbosheth, the son of the late king Saul and now king, accuses Abner, the general of his army, of having sex with his father’s concubine Rizpah. While Abner does not actually deny the charge, he is indignant at being called out in this way, considering all that he’s done for the house of Saul—which indeed has been plenty, including installing Ishbosheth on the throne! He is so angry that he threatens to transfer his allegiance to David, who has been made king of Judah. Now Ishbosheth—the king—is afraid of him.

Abner gets right on it. He contacts David in Hebron and offers to make the rounds of all the elders of Israel, reminding them that they have already expressed a desire for David to rule them and that God himself has selected David for their king. It all looks like it’s going to plan, but then a certain Joab, one of David’s courtiers, who bears a grudge against Abner for killing his brother in battle, lures Abner aside and murders him. David then has to scramble to distance himself from this act, declaring publicly that neither he nor his kingdom bears any guilt for it, since he had no foreknowledge of it. He rebukes and curses Joab and his whole household, but does not punish him. Apparently Joab is too powerful or popular for David—the king—to touch.

Although God appears in this narrative here and there, he is a background figure. He is only one of the political actors, and apparently by no means the most influential. He leaves his chosen king, David, the “man after his own heart,” to improvise in herding the cats of his court to form a united kingdom of the Promised Land. (Maybe God commiserates with David: “Welcome to my world!”)

One thing that struck me about this episode is that it contains the modern feature of a political sex scandal, showing how the sexual escapades of powerful men can lead to political crises. The Eden theme of forbidden fruit rises again in a new and fraught context. Maybe Ishbosheth would have found some pretext in any case to challenge Abner, but in the story it is Abner’s taking liberties with his late father’s concubine that puts events in play that will lead to David’s ascent to the throne of all Israel and Judah. This sexual element in the political story feels authentic, and to me speaks for the basic historical accuracy of the account. It’s the kind of thing you show because it’s true and not for any other reason.

I can understand why God is put out that his chosen people are rejecting his own kingship over them, but it does raise a question about his—how else to put it?—performance. It’s hard not to conclude that the Israelites want a human king because they are not satisfied with what their divine one is doing for them. That’s got to hurt.

On with my close reading of the Bible, then. It contains plenty of surprises.