Is it a crime to kill a fictional character? 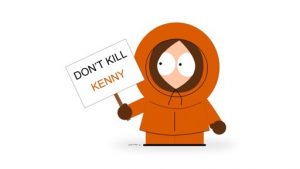 Maybe in this case it’s okay.

Spoiler alert: This post contains spoilers not only about The Old Curiosity Shop by Charles Dickens, which I already spoiled last time, but about Game of Thrones, the television adaptation of George R. R. Martin’s novel series A Song of Ice and Fire. So if you haven’t read or watched as much of those works as you want to, come back after you have!

Still here? I was saying that the death of fictional characters represents the death of a value within a story and the world that it portrays. My thought was that the death of Nell in The Old Curiosity Shop, since she is a little paragon of virtue, represents the death of pure virtue itself. She dies, at bottom, because she doesn’t have enough friends to care about her! Those non-friends are us: we don’t befriend virtue, meaning that we remain more or less strangers to it. Nell’s fate was of keen interest when the original serialized version of the novel was published in 1840; Wikipedia writes of how

it was so popular that New York readers stormed the wharf when the ship bearing the final instalment arrived in 1841.

What happens to the sweet angelic little girl? She croaks—that’s what happens. And how did readers feel about this? Wikipedia doesn’t give a general description, but it does report one reader’s response:

The Irish leader Daniel O’Connell famously burst into tears at the finale, and threw the book out of the window of the train in which he was travelling.

A free book for someone—one with an at least partly sad ending.

Nell’s death is sad. The death of virtuous characters in stories makes us sad. The death of vicious characters, on the other hand, generally does not—especially if their vicious behavior has brought about their own death. This is what happens to the dwarf Quilp in The Old Curiosity Shop: in seeking to evade capture for his crimes, he manages to drown himself. Unrepentant to the end, he is as much a paragon of vice as Nell is of virtue. Without him, the world will be a better place, and a number of characters—such as his sweet-natured widow—will find their lives easier.

But isn’t that callous of us, to mourn nice characters and exult in the death of mean ones? Is this how we behave in real life? Gloating when some irritating person has died? I think that most of us, while we may secretly have some such feelings, also feel genuine sorrow, or anyway a certain proper seriousness, even when a tiresome person dies. We may have wished that they were punished for what they’d done to us, but we hesitate to inflict capital punishment on people, even if they have given us a fair amount of trouble. Our sense of justice realizes that the punishment should fit the crime, and for most of us, in everyday life, a death sentence is going over the top. We don’t really want to group ourselves with the tyrants and autocrats of the world, who kill people when they get in their way.

With fictional characters the case is different. It’s true they’re not real people and so we can make free with our wishes about them; our inhibitions can be shelved, and this might be one of the many pleasures of fiction reading and viewing. But I think it’s also something more: it is because characters represent ideas, and the death of a character is thus not just the death of a person but the death of a value. And while some values we would like to see preserved and strengthened, others we would like to see extinguished. Thus, as I suggested in my last post, when Nell dies in The Old Curiosity Shop, it is not just a sweet little girl who dies, but it is sweetness itself that dies—virtue itself that dies. The author is, in a way, erasing it from the world of his story. And that, I say, is what is really sad. That is what makes us forlorn; it brings up thoughts like, “What’s the point of it all?”

For this reason, storytellers should take care which characters they kill—and how and why. Charles Dickens, I think, mostly takes such care. He knows that his characters’ lives, in some way, mean something to the reader. But George R. R. Martin is a different case. He has gone on the record that none of his characters is safe:

I think a writer, even a fantasy writer, has an obligation to tell the truth and the truth is, as we say in Game of Thrones, all men must die. . . . Once you’ve accepted that you have to include death then you should be honest about death and indicate it can strike down anybody at any time. You don’t get to live forever just because you are a cute kid or the hero’s best friend or the hero. Sometimes the hero dies, at least in my books. I love all my characters so it’s always hard to kill them but I know it has to be done. I tend to think I don’t kill them. The other characters kill ’em. I shift off all blame from myself.

Here I disagree with Mr. Martin. For while it’s true that all men must die, it’s not true that all characters must die. There are plenty of stories in which no characters die, and even Game of Thrones has its survivors at the end. And though Mr. Martin tries to shift the blame, the responsibility is his alone: the death of a character is always a choice—the author’s choice. In that way it’s an act of murder.

It’s also a declaration of a view of the world. Every story is a miniature model of the world, and its characters embody the qualities that exist in that world. When a character dies, so do the qualities he embodies. If a storyteller kills a virtuous character, this creates a trauma for the reader or viewer from which he or she may not recover—as witness Daniel O’Connell above. For me, this moment came in Game of Thrones with the treacherous murder of Robb Stark, the young commander who embodied the virtues of honor, integrity, courage, and justice. I continued to watch the show, but I was less involved, and became progressively less involved as the thing moved to its damp-squib ending.

Killing characters should not be a casual decision any more than killing real people should be. The more invested in your story the audience is, the more they will care about its characters, and the more they will feel the shock of their deaths. Killing virtuous characters has a dulling and distancing effect on the audience; you’re turning down the lamp of virtue in your imagined world, making it more of a twilit place. By extension, you are making a comment on the world in which the audience lives. I think that Mr. Martin has allowed plausible-sounding logic to lure him into acts of fictional murder, and not only were the characters his victims, but the story itself died a little with each death.