Okay—my intentions are still good! I’m getting back to this blog, and my intention is basically to talk about my reading. Writers are first of all readers, and I think it may be a lot more interesting and illuminating to look in on my reading than on my writing, which I can’t really say too much about in some ways, for various reasons.

In my last post I mentioned my then-current reading list. I’ve now finished all those books except for A Feast of the Nectar of the Supreme Vehicle, which still starts off my daily reading period. As of today I’m on page 647 of 939. Yes, it’s massive. What the heck is it? And why am I reading it? 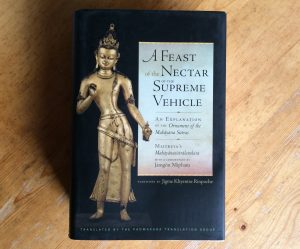 I formally became a Buddhist in 1987 after about 10 years of spiritual crisis which took me from late adolescence into early adulthood. In 1987, at age 28, I felt that I had found a spiritual path and a spiritual home in an organization that was then called Dharmadhatu, and is now known as Shambhala International. (Shambhala was  brought to a crisis of its own in 2018 after the emergence of charges of sexual misconduct on the part of its leader, Sakyong Mipham, but that’s outside the scope of this post.) Dharmadhatu instructed students in the branch of Buddhism known as Vajrayana, which was practiced mainly in Tibet and Mongolia. Vajrayana, a name which means “indestructible vehicle” in Sanskrit, is presented as the highest and most advanced of the  Buddha’s teachings (this is disputed by other Buddhist schools), and features exotic practices and lurid iconography. It’s easy for the outsider looking in to get distracted by the exotic features, but Vajrayana is a complete path with simple introductory practices for beginners, and its teachings are mostly consistent with what is taught across the spectrum of all the Buddhist schools.

Every Buddhist is taught to progress along the path by means of practice and study. The practice part essentially means meditation; the study part means attending dharma courses and talks by teachers, and reading on one’s own. Accordingly, I strive to meditate and to read some dharma each day. To demonstrate that I place this reading at the top of my list, I begin each day’s reading period with my current dharma text. Right now that’s A Feast of the Nectar.

I came to this book after I realized that I wanted to read all of the works of Maitreya. And who is Maitreya? Maitreya is said to be the next Buddha, as Siddhartha Gautama is the current Buddha. According to Buddhist doctrine, Maitreya currently resides in the heaven called Tushita, awaiting the time when the doctrine of the current Buddha has died out from the Earth. Sometime after that sad event, Maitreya will take birth on Earth, attain final enlightenment, and start a new cycle of teachings to help benighted beings everywhere.

In the 4th century AD, an Indian Buddhist monk named Asanga felt special devotion to Maitreya, and earnestly sought to encounter him. Long story short, he eventually succeeded and met Maitreya in a series of out-of-body experiences in the Tushita heaven. In these encounters Asanga received five dharma texts in verse form. The largest of these is called the Ornament of the Mahayana Sutras, and it is this that forms the basis of A Feast of the Nectar, which is a commentary on Maitreya’s sutra written by Jamgön Mipham (1836–1912), a Tibetan monk and polymath. The hardcover book I’m reading was translated into English by the Padmakara Translation Group and published, very nicely, by Shambhala Publications (not directly connected with Shambhala International).

In this sutra Maitreya gives a compressed overview of the entire Mahayana path (mahayana is Sanskrit for “great vehicle,” another broad grouping of Buddhist schools, these being primarily those of East Asia). The central figure of the Mahayana is the bodhisattva (“awakening being”), the student motivated by the desire to help all other sentient beings achieve the same enlightenment as the Buddha. Maitreya himself is just such a bodhisattva, the most advanced of them all, but every student of the Mahayana is also a bodhisattva, no matter how humble and raw a recruit. I myself took the Bodhisattva Vow in spring 1988 here in Vancouver. So I’m at the intake end of the pipeline that is ready to output Maitreya at the other end, fully processed and ready for enlightenment.

I have read a fair number of dharma (Buddhist) books in my life; I don’t know if it’s as many as 100, but it’s certainly more than 50. No, it must be more than 100—I’ve just looked at my bookshelves and there are more than 100 dharma books there. I have also attended a good many dharma talks and courses, including Vajradhatu Seminary in 1994, a 3-month program of intensive study and meditation in the Colorado Rockies. But reading A Feast of the Nectar reminds me that I remain a beginner, still in the early stages of learning the ins and outs of the vast, profound dharma of the Buddha.

Shall I give a bit of the flavor? I’m on chapter 19, “Elements Leading to Enlightenment.” The first heading here is “Prerequisites,” under which there are 8 subheadings. I’m on the 8th of these, “The Two Accumulations.” The Two Accumulations are those of merit and of wisdom. To accumulate merit essentially means to accumulate good karma in order to become a worthy vessel for the teachings. To accumulate wisdom means to understand more and more of the teachings on a direct, nonconceptual level. Under this subheading there are 4 stanzas in Maitreya’s original text. The last of these reads:

In order to enter, to be free from characteristics,
To act spontaneously,
To be empowered, and to reach the ultimate,
The steadfast accomplish the accumulations.

As you can see, it’s not easy to see what that means without help. Hence the need for a commentary. Each of the terms has a special meaning.  For example, to enter, in this context, refers to entering the so-called bhumis or spiritual levels, which are 10 discrete levels of mental and physical realization through which bodhisattvas pass on their path to buddhahood. And to be free from characteristics, in this context, means to have such a command of the teachings that one no longer needs to conceive of them as separate points; one embodies them rather than knows them. And so on for the rest.

I’m taking my time with this book, as you might imagine. I read 3 or 4 pages a day, on average. Oh: and I also burn a stick of incense while I read. I have quite a few different kinds of incense; today’s was wisteria. My sense of smell is not keen, but this practice does seem to heighten my peace and receptivity as I read. I also meditate for a time beforehand.

So there you have it: the book that’s been launching Paul’s reading period for past few months. I intend to post about all the others I’m reading as well. Stay tuned.