In search of the great 19th-century novel

My reading time each day follows the same pattern. I start, as I mentioned last time, with whatever dharma text I’m currently reading. Then, in number-two slot, I read fiction. At this point I make myself a pot of tea to enjoy with the read—something I remember doing as early as my teenage years. The stick of incense I have lit for dharma study is also still burning. Today it was a scent called Lemony Fresh, which I got, along with others, on Etsy.

The novel I’m reading right now is Jane Eyre by Charlotte Brontë, published in 1847. It’s my second time through; I last read it in 2019. And, as with the first time, I’m enjoying it—even more. 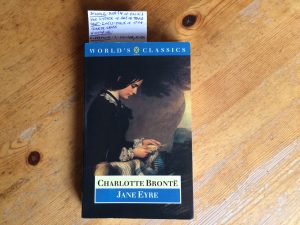 If Edward Rochester doesn’t want her, I’ll take her.

I’m reading it as part of a little festival I have created for myself: The Best Novel of the Nineteenth Century. I came up with a list of nominees, which I intended to have only 5 members, but a couple of accidents and second thoughts occurred that have had the result of ballooning the list out to 10 members. After listing them, I used a random-number generator to scramble the reading order. Here are the nominees in the final reading order, each listed with author and original publication date:

No doubt many would disagree with my list of nominees—let them make their own festival! My intent was to come up with a list of novels that I thought had a serious chance of winning the title. Two of them I have never yet read—Middlemarch and The Red Badge of Courage. These I have added due to their reputation, afraid to leave them out of the running.

One title I was sure, until recently, would be on this list is Crime and Punishment by Fyodor Dostoyevsky, published in 1866. This book shook my world when I first read it in 1972 at age 13, and I had read it a couple of times since then as well. But when I read it again half a year ago I thought there were problems with it. It’s excellent in many ways, but my new reservations meant that I knew it was not going to win my current festival. It did not make the short list.

How will I come up with a winner? I don’t know. I’m flying by the seat of my pants. The winner, I think, will combine high degrees of raw enjoyment and deep significance.

Jane Eyre scores well on both counts here, I think. The raw enjoyment comes from a good story well told. I rate storytelling very high in my assessment of a novel; delivering a good story is the primary mission of the novelist, as far as I’m concerned, and I would say that storytelling is worth 85% of the novel’s final grade. Everything else—all the figurative language and vivid description that constitute “good writing”—makes up the remaining 15%. Jane Eyre does very well here, combining romance, mystery, and even a rebirth plot for its troubled hero Rochester.

And deep significance? There may be a few ways in which Jane Eyre is deep as well as pleasing, but one thing that catches my eye this time through is the author’s portrayal of the male-female dynamic. Jane, the narrator, always refers to Rochester as her master, and clearly does so with deep affection and pleasure. But in moments of highest crisis, not just with Rochester but at other crises in the story, Jane makes reference to her fundamental equality with others. If you ever read Jane Eyre, or the next time you read it, I warmly suggest that you keep this thought in the back of your mind: what is the role of equality in Jane’s story, and what does it mean?

I hold this novel and its author in high regard, and feel that it is most worthy to occupy the short list for Best Novel of the Nineteenth Century. I hope Charlotte Brontë is happy, wherever she now is.