The one less traveled by

Lately I’ve been thinking about my life, my history, my activities, looking for a common theme. I’ve had so many interests, so many projects–is there any unifying theme behind them all?

Yesterday the answer came to me: education. The driving force and unifying principle behind my life has been education–my own education.

Have I not had this thought before? Maybe, but yesterday it hit me with a new force. I’ve always loved learning, but I don’t think I ever saw clearly that education is and has always been the central organizing force of my life.

One fact that has perhaps hidden this realization is that I don’t have a formal education. I dropped out of my first year at the University of British Columbia in December 1979, having attended for only three months. I felt lost and alien on the vast, swarming campus, and knew I did not belong. Aside from simply getting a degree, there was nothing I wanted to study there. I was 20 years old and had no feeling of purpose or motivation. I was going through the motions, trying to be a lemming–a role for which I was not fit either by temperament or by the facts of my life at that time, for I had taken two gap years after graduating from high school and was therefore two years older than most of my classmates, which was a big difference at that age. I was paying my own tuition, and could not justify to myself the cost of pressing on.

The decisive day was in early December–quite possibly Friday, December 7, a cool, sunny day in Vancouver. It was time to write the final exam for Math 100, Introduction to Calculus, and I arrived early at the Sedgewick Library to study. I had no particular reason to fear the exam, since I was good at math, but my flagging motivation had meant that I had slacked off in this course as I had in others, except perhaps for English, so I intended to bone up as much as I could before exam time, which was at eleven o’clock. 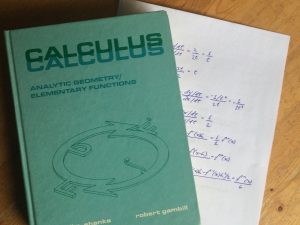 A farewell to equations.

It was pleasant in the library, a modernistic concrete building much different from the Main Library, a massive institutional building raised in 1924. Sedgewick, even though it was partly underground, had windows and skylights that admitted the sunshine. I recall seeing the blue sky as I sat in my chair. I recall too looking at a nearby shelf of reference books. One in particular caught my eye: A Dictionary of Symbols by J. E. Cirlot. Intrigued, I pulled it out and looked at it. Here was something really interesting: the world of symbols. Math was interesting too, but the symbols were beckoning me.

I reshelved it and returned to my studies. I checked the clock: half an hour to go. The Math Building was a short walk away; I could be in place within five minutes. I would study a bit, look out the window, check the clock, and return to studying. I thought about my unhappiness with university life and my lack of a goal there. What excited me was the short story I was working on, “The Hermit,” about a student my age who decides to drop out. It was not a school project (although my English prof, Dr. Whitehead, gladly accepted it in lieu of the final essay assignment for the class), and it represented what I actually wanted to do with my life: be a creative artist.

I started feeling butterflies in my stomach. What if I did not write my math final? It would mean failure of Math 100 and would be tantamount to a decision to drop out. Fourteen minutes to eleven o’clock. Time to be getting my things together and making my way to the class. But I remained in my chair. Twelve minutes to. Nine minutes to. The butterflies were strong now, fluttering in my gut, down in my intestines. Seven minutes to eleven. The butterflies flew away in a crescendo of excitement, of realization–I was not going to write that exam. I was dropping out of university.

As eleven o’clock arrived, an elated calm came over me. I had a strong feeling of having left the mainstream. I was going to live the life of an artist, come what may. I was going to live my own life, my own way. It was not going to be easy, but it was going to be all mine. The 20-year-old youth who walked out of the Sedgewick Library a few minutes later was a different person than the one who had walked in. He was no longer a student; he was an artist. I drove home in my mother’s yellow Volkswagen Beetle, stopping at the Safeway on 4th Avenue to pick up a turkey for the coming Christmas dinner. I felt strange, but good; in some ways I have never felt better.

An image that has come to my mind many times since then is a memory of driving the Trans-Canada Highway east out of Vancouver. When you get to Hope at the apex of the Fraser Valley there are junctions where the highway divides. One division is that between the Hope-Princeton Highway and the Coquihalla Highway. I’ve driven both of them, and I’ve been struck by the sight, once you choose one highway or the other, of the other highway peeling away in another direction–an option no longer available. There’s a distinct feeling of irrevocability: you make your choice and you’re on your path. You are headed for somewhere different than if you had chosen the other route.

My moment in the Sedgewick Library was much like that. A whole future peeled away, never to be lived. I had chosen a different future, an unexpected one. My life now had become an exciting mystery: what would I make of it? I was not to be a varsity man or to have a career in any normal sense of the term.

I’m not sure what I expected, but whatever it was, my life hasn’t been it! Still, I have no regrets–quite the contrary. I’m quite sure that I would have regretted pressing on with university in default of having any goal or plan. And there is danger in pursuing a course when one’s inner voice has counseled otherwise: just as one can throw good money after bad in doggedly clinging to a questionable investing decision, one can throw good time after bad–and waste an infinitely scarcer resource.

But I was talking about education. I’ve only just touched on the subject, but here I wanted to note the irony of my dropping out as being an important step forward in my education–my real education. It’s hard not to think of Mark Twain’s epigram, “I never let my schooling interfere with my education.” Without realizing it, I was trying to follow in his footsteps.

I think too of Robert Frost’s famous poem, “The Road Not Taken,” written supposedly as a joke in 1915. But Frost also liked to say, “I’m never more serious than when joking,” and another poet has advised us that “Jesters do oft prove prophets.” Joke or not, it’s the effect on the hearer that counts. Frost’s poem touches my soul.

It’s only four short stanzas, but I’ll close by quoting just the final one.

I shall be telling this with a sigh
Somewhere ages and ages hence:
Two roads diverged in a wood, and I–
I took the one less traveled by,
And that has made all the difference.

I hope to explore in more detail what I mean by my education–but that’s for future posts.